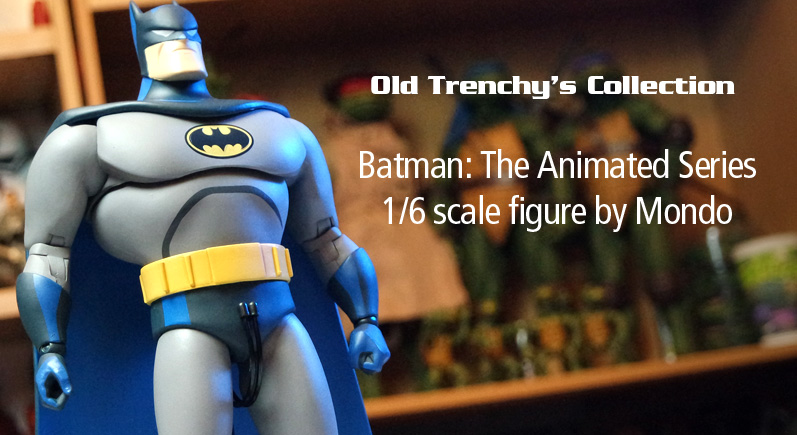 Having another close look and play of my Batman: The Animated Series 1/6 scale figure from Mondo and I’m still very much a fan of this figure.

As I said in my unboxing post, I’m still handling him rather gingerly but the joints are sturdy and smooth. In particular I’m liking the ratcheting wrist joints as they, which I don’t see too often. I’m also liking how they engineered the double elbow joint to also include a pivot instead of having an unsightly seam further up the arm.

Posing him has its challenges mainly because his cape is a very thick vinyl and the weight throws him off. Although not impossible to go without it’s a lot safer with the stand.

One of the things I like about the alternate hands is that they are somewhat flexible to help with installing an accessory like the grappling hook launcher but still sturdy enough to hold them. And although not ideal, it’s *just* flexible enough to wrap his figures around the thermos of Alfred’s cold remedy, chicken soup.

Speaking of the launcher, there are two versions: one normal and the other featuring a black armature wire “cable” in order to pose it in firing action that makes for a cool effect.

There are three swapable heads with different expressions (my fave is the smirk but sadly only the “Exclusive” edition came with the thumbs up alt hand for that favourite GIF). There’s also a removable gas mask, which mine sadly had a few frayed ends on the elastic but it’s minor.

As per the previous post, I’m still not happy about the paint chipping around the top rim of the neck, rubbing off onto the inside of the jawline. While hidden most of the time it does become noticeable in certain poses and at certain angles.

I think the biggest issue I have is that this figure isn’t quite 1/6 scale as claimed. While he’s dwarfed by the Arkham Hot Toy, which is in all fairness rather exaggerated, Mondo’s TAS Batman isn’t quite 12″ as claimed. He only gets there if you include the stand and the bat-ears. So that means Bruce doesn’t quite translate to 180cm or 6′ in real life.

Still, I like it and I’m glad Mondo have adjusted their price points on their figures (and even more so I got this for less than that). ?

If you enjoyed that nonsense as well as my other work then please consider contributing to my tip jar at http://ko-fi.com/oldtrenchy so I can spend more time churning out more of these word spews.