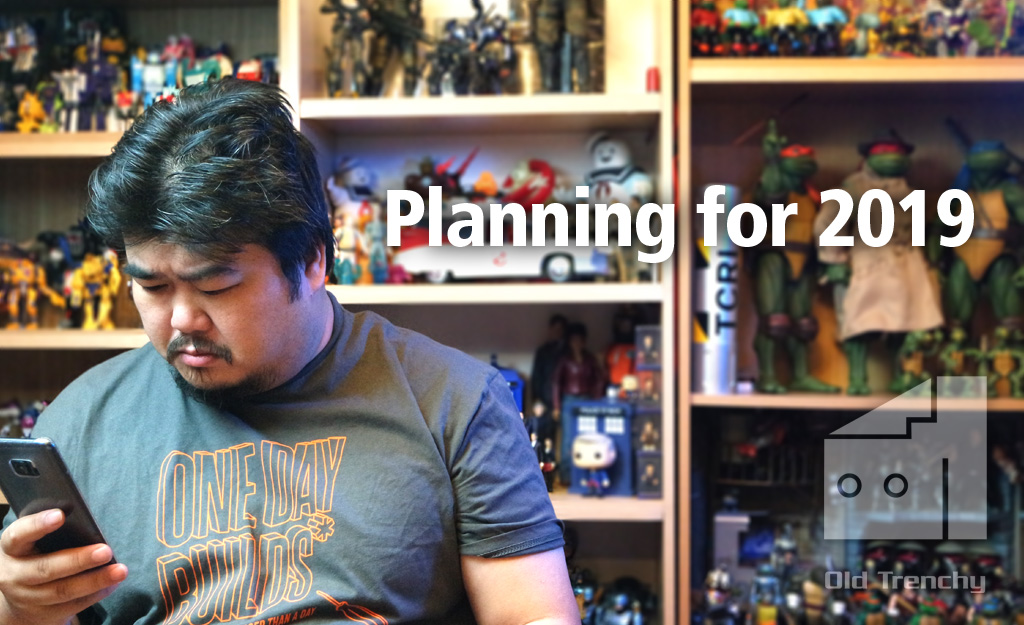 This is a bit of a tough one but not really…

See, I always know what I want to do at the beginning of the year. I’m a planner, I often have a range of ideas and procedures in place of the direction I want to take (relative broad strokes for the most part anyways).

But as I said in my 2018 review, I’m not as resilient as I should be. So often many little obstacles can throw me off the path.

So I begin 2019 being a little more self-aware of that.

Well, if I’m honest I’m always aware of how bloated my plans for the upcoming 12 months are. I’m fairly aware of my limitations and my predilection for taking things slow. But as cautious as I am, January is always an enthusiastic start to the year for me. For all the negativity people think I have, I’m mostly about setting big goals but being realistic in regards to achieving them so I never feel too despondent.

No more Sunday Sermons?
As some of you may have noticed, this word spew is absent the usual ‘Sunday Sermon’ title I’ve been using for the last four or so years. And that’s mainly because I think the joke has run is course.

For those unfamiliar: my Sermons began as rants about anything that was bothering me at the time. They started on my private accounts and were both cathartic and informative (especially when they were calling out the troublemakers) but I eventually went public with them. I started calling them “sermons” as a joke response to the big name cosplayers at the time writing long wordy spiels trying to lecture everyone else how to live their lives despite lacking any real life experience.

It’s funny how they don’t do that anymore.

It would be disingenuous of me to say that everything I wrote was in service of “the community” but in any case, I decided to own how sanctimonious I sounded whenever I was pointing out that the emperor had no clothes or for some people to fucking sort their shit out.

Also, because I sort of have to explain the joke for people, I suspect that a lot of newer folks were avoiding these because they feared it was religious.

So if anything I’m just dropping the “brand”. That allows me a little more freedom of when I publish these things (although I was never that good at getting them out on a Sunday to begin with) as well as what I write about.

I’m still maintaining the sanctimonious tone though because some motherfuckers still need to learn their lesson.

Cosplay
My cosplay build plans are more or less the same as previous years but as non-superstitious as I am I also feel as if I jinx myself whenever I reveal them.

I will add that I also have build plans that I am not willing to publicly reveal until it’s time to debut. Previously, showing each and every step of my build progress was a great way to keep up my motivation but with the way social media throttles my reach and the lack of interaction from followers (“yeah I saw it but didn’t react” BS) it doesn’t really work anymore. So maybe if I don’t show anything I might be able to ween off that need.

Toys and Collectables
In the last couple of years, some of my focus has shifted to toys and collectables. In fact my Instagram is pretty much full of my daily bargain hunting around Adelaide and online. But like cosplay it’s a part of my expression in the things that I like.

And so I’ve been contemplating doing more stuff related to toys, the additions to my collection, and the bargains I find around the place. I already did a vlog about my weekend at the Mega Toy Fair last year and now I’m currently working on a video that goes through my favourite and frustrating buys from 2018.

As far as future stuff, I anticipate more blogging as well as toy reviews and the like.

I’ve been using “cosplayer” to refer to myself less and less lately. Not because I don’t cosplay as much as I used to, far from it (funnily enough I used to be one of those blowhards that insisted on “costumer”). But I’ve always been a “maker” and cosplay was just one aspect of my creative outlet. I’ve said this many times before but I used to build poker tables because I was once really into Texas Hold ’em and would host multi-table knockout tournaments for my friends.

So as another outlet and a melding of two of my interests I’ve been toying (haha get it?) with the idea of creating custom figures.

I’ve had this idea for a few years but it’s only been in the last 12 months that I’ve slowly been gathering some of the parts I need for a few projects I’ve already started on.

At the moment my goal is to create stuff that either doesn’t exist, is too expensive to get a hold of, or create a version that is more satisfying than what’s out there. It won’t be for sale though. I have no plans at the moment to create stuff to sell or take on commsions. Again, I know my limits.

In any case, it’s not too far from what I already do. It’s just “mini cosplay”.

Upcoming Events
Adelaide has a series of events I’ve already penned into my calendar. Both AVCon (July) and Supanova (November) of course in terms of conventions but there’s also the Mega Toy Fair in June as well as the Adelaide Comic & Toy Fair (April and October), the latter I tend to set up shop at.

We also have Free Comic Book Day on the first Saturday of May (usually same weekend as the Medieval Fair but I always choose FCBD).

There’s no news yet about Press Play which doesn’t really mean anything other than confirm my “band-aid” suspicions.

But Adelaide Zombie Walk will be back in October. I still enjoy it but I reckon it may be getting smaller as the zombie fad slowly dies down.

There are at least a couple of major Marvel movies released in the first part of this year (but I tend not to dress up for those). I still mention them as “events” because let’s face it, ‘Captain Marvel’ is a big deal and ‘Avengers: Endgame’ is a culmination of 10 years worth of story so these are major milestones.

There’s also ‘Star Wars: Episode 9’ but if JJ Abrams characteristically plays it safe and undoes all the awesomeness that was ‘The Last Jedi’ just to appease the angry man-children, I’ll be rather disappointed.

As much as I would like to head interstate I don’t know how likely that will be. I keep saying this every year but this time I have to be realistic about it.

Cost is always a major issue with these things and a lot of folks seem to forget how much goes into heading to another city with massive, bulky, cosplays in tow. And as generous as some folks have been about offering accommodation, I don;’t think they realise what they’re getting themselves into (having said that I don’t booze up like I used to but being away from home, who knows… ).

I’d like to finally got to my very first PAX but I’m no longer the kind of person that can buy an expensive weekend pass so far out from an event (it’s a practice I’ve never been comfortable with anyway).

Spare some change?
Last year I signed up for a Ko-Fi account and while there were a few generous folks out there it never really blew up in any meaningful way.

I didn’t really do enough to warrant the charity of other’s I guess? Or people didn’t deem my work good enough to contribute to what is ostensibly my tip jar? I’m not complaining, I’m just analysing out loud is all (as well as a reminder that this exists). Hopefully I can produce enough stuff to change it.

I also launched a Patreon at the same time but quickly set that aside because I don’t feel a “subscription” service is suitable to how I do things. Personally, I don’t believe in gating off my work and my knowledge behind a paywall, especially when a lot of what I learned over the years comes from others who were generous with their knowledge. Never say never but that’s just how I feel about this at the moment.

And so I guess that’s where I am at in planning out my 2019 in the broad strokes. I’m always optimistic and hopeful and forever looking forward to doing bigger and better things as well as meeting new people along the way.

A lot of people get cynical about New Years Resolutions, I don’t call them that myself I just call them “plans”. But really whatever gets you motivated even if you fail, at least it’s a place to start.