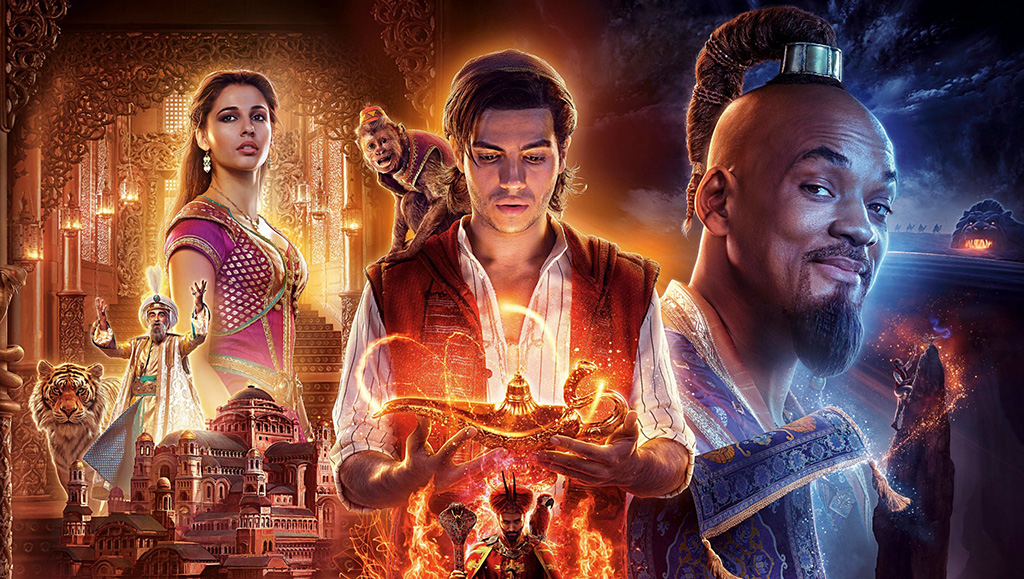 Out of all the films that came out of Disney’s “renaissance” during the early 1990’s, Aladdin was the pretty much the only one that stood out for me and became a favourite of mine as a kid. So some might assume that I may have had a few misgivings about a live-action remake of such an animated classic.

Nope. In fact of all the remakes this one was the one I was looking forward to the most and I’m pleased to say it’s fantastic and a hell of a lot of fun!

From memory, this new adaptation pretty much retains most of the elements and story beats of the original while adding a few new ones as well as, thankfully, changing up a few of the more problematic aspects. While not without its flaws, the end result is most entertaining.

I must admit to being blindsided at finding out that this was directed by Guy Ritchie, which if I’m honest I haven’t been a fan of a lot of his work (not that I dislike any of it, it’s just not to my tastes). Yet this film not only looks gorgeous but also surprisingly (for Ritchie) restrained in its cinematography at the same time.

A lot was made in the lead up at the news of Will Smith being cast as the Genie, a role that was originally written for the late Robin Williams (and pretty much kick-started, for better or worse, the trend of celebrity voices in animated features). But I’ve always liked him and was confident this would work… and it paid off because Smith is fantastic in this role.

For the few moments where he’s doing the more frenetic, Robin Williams-style shtick it can feel a tad awkward (only because we’re still making comparisons) but when he’s allowed to just be Will Smith, doing the hype man, life coach bit that Smith is good at, then it’s fantastic. Others have pointed out before me that he’s basically playing ‘Hitch’ again and when you view the Genie as basically Aladdin’s wing man that’s pretty much perfect.

Smith himself claims that he channelled his “Fresh Prince” persona for the role and I think that’s rather apt (in fact I loved the Fresh Prince reference when it was first shown in the trailer).

The whole cast give great performances to varying degrees, most of them relatively understated as to match the nature of the live-action tone. Mena Massoud makes a great Aladdin, and while your mileage may vary, has the right amount of boyish charm for the role. Certainly a “diamond in the rough”. The addition of a new character Dalia, played by SNL alum Nasim Pedrad, as Jasmine’s handmaiden is not only great in giving moments of levity but also someone for the Princess to play off of when she would otherwise be alone talking to Rajah.

Again, I seem to be the only one who thinks this but I enjoyed Marwan Kenzari’s rendition of Jafar. It’s a lot more subdued than the maniacal and theatrical animated original, which I think people were hoping for , but for me the seething and sinister performance worked best here rather than play up to the cartoon exaggerations (don’t worry, he gets there eventually). They even add the tiniest hint to Jafar’s backstory of also growing up a thief creating a parallel to Aladdin as well as a narrative set up.

Also, they apparently got Frank Welker back to voice the “Cave of Wonders” and supposedly Abu too.

The break out star turn, however, is most definitely Naomi Scott as Jasmine. There’s a “wow” moment when we’re first introduced to her and an even bigger “WOW” during her entrance scene at the royal palace. But even beyond that, Scott is more than capable of conveying Jasmine’s strong, stubborn will as well as her ambition to help her people. There’s a story tweak where she aspires to be Sultan despite the old traditions that forbid it and it works nicely to empower her instead of solely waiting to be married off.

And Scott began her career as a singer before being discovered by Disney so her rendition of a brand new song is simply amazing and an absolute belter of a track (I’ve pretty much had it on loop for days). Seeing it in the context of the movie is really quite a moment.

Speaking of musical numbers they’re all here, heaps of fun, and full of colour and spectacle. Some have noted they appear a little “too Bollywood” but ignoring for a moment that Argabah is fictional (apparently was meant to be Baghdad but back in the 90’s the Gulf War was happening), it’s also set up as a trading port featuring various cultures from the immediate region as well as it being implied that Jasmine’s late mother was from another region, which helps to explain some of the blending of aesthetics.

In any case the music is a lot of fun and all too tempting to sing along with in the cinema.

If I have any complaints it’s that despite the CG landscapes and digital set extensions, this still feels like a smaller film than it should. I think part of that has to do with the size of many of the interior sets. While you can draw a throne room as large as you wish in animation, the realities of budget as well as traditional architecture of the period (fictional as it is) probably limited how outlandish they could make it.

Also I think the editing may have been a bit clunky in a few places. I don’t know if that’s due to editing for time or whatever else but those few moments make we wonder if they needed to limit it to the 128 minutes running time, because it didn’t feel that long at all. In fact I was expecting more but the pacing actually worked if nothing else.

This live-action remake, like others being made by Disney, is faced with a lot of criticism and cynicism as to why it was necessary to do in the first place? Of course cashing in on nostalgia is the obvious and honest answer but it also has to do with Disney wanting to extend its copyright on their version of the property. It’s also to attract and entertain a new audience that may not enjoy the original even if they had access to it (yes, believe it or not, it’s not always about you).

So if you are going to appeal to a new generation of young fans you might as well fix and get rid of the more problematic aspects of the original in regards to harmful stereotypes and portrayals, which I applaud it for.

The majority of the main cast are of Middle-Eastern and Asian descent, which is quite a boon for a Hollywood movie. And seeing as it took the number 1 spot at the box-office its opening weekend in the US, it also helps to further break the “conventional wisdom” other films like Black Panther and Crazy Rich Asians have also been disproving that diverse casting is a barrier to making substantial coin.

Of course it’s not perfect in its attempts at being progressive (it must be noted that early translations of The Thousand and One Nights aka The Arabian Nights actually had the tale of Aladdin and the Magic Lamp set in China) but I would much rather they try and take positive steps toward such rather than maintain the problematic mistakes of the past.

Aladdin is a fun and highly enjoyable fantasy adventure with a great balance of nostalgia for old fans as well as enough appeal for new fans. If you’re attached to the original it won’t rock your world but it has me still singing the songs to myself long after leaving the cinema. As with most of my movie reviews it depends on whether or not I’d want to see it again and this is definitely a blu-ray purchase (maybe even 4K in case I want upgrade in future) so I can watch it again and again.

I hope you enjoyed my ramblings. If so please support me by heading to ko-fi.com/oldtrenchy and buy me a coffee or ten!