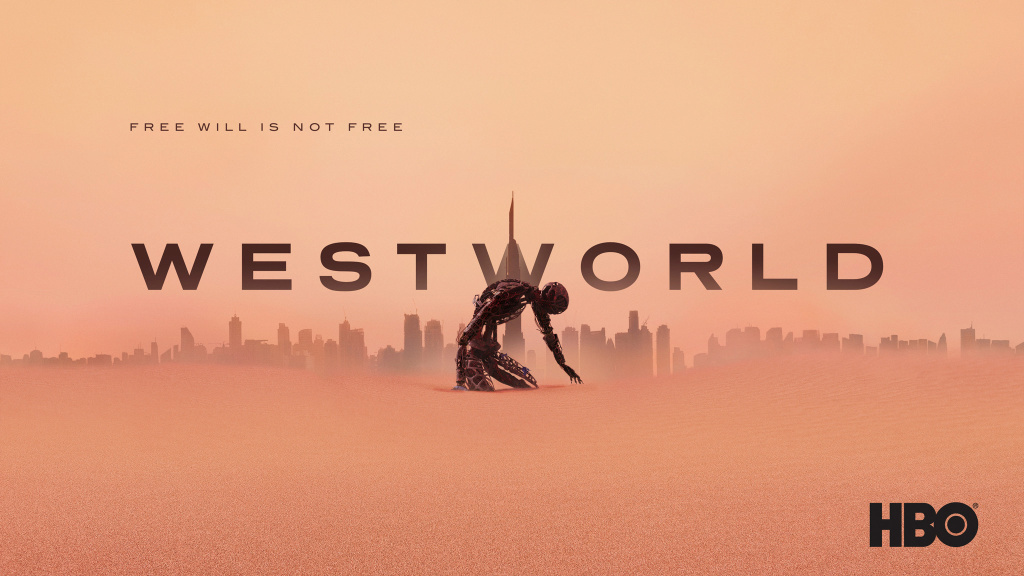 Although it looks like a massive departure from what came before, season 3 of Westworld is still compelling and exciting as seasons 1 and 2 dealing with big-picture philosophical issues with a meditative pace to its story telling that is prescient yet timely. It also feels like a much more straightforward story with less mystery but there’s still plenty of twists and surprises to keep the viewer from getting too complacent.

From here on there will be MINOR SPOILERS probably not more than what’s already seen in the trailers but if you were a fan of the first two seasons then season 3 is definitely worth your time and a seemingly logical progression of what we saw happen in the park.

While most fans were excited when the end of season 2 hinted that some of the hosts escaped the park into the real world, by the time the first promos for season 3 dropped there was mild consternation. One of the appeals of Westworld as a series was the faux-Western trappings intertwined with the not-too-far-future setting. With that period veneer gone would season 3 just be a generic science fiction show?

And the answer is… kind of but not really?

See, if audiences hadn’t fallen so deep into the story and characters of the first two seasons then there is every chance season 3 might not get a look in otherwise. The story, in isolation, could easily be considered “too on the nose” with what it’s trying to say about power & control, tackling the concept of “free will”, as well as the timely issue of privacy and data collecting. However, Westworld’s backstory is not only important to this particular arc but also the investment of the audience with the characters, all of whom are so well performed by the way, is vital in seeing how this all plays out.

Once again, I have little else but praise for the performances (possibly because anything I didn’t like was either not egregious enough or memorable enough to dislike). There were plenty of returning characters, most of whom are surprises, but among the new faces Caleb Nichols (Aaron Paul) is a great addition. His melancholy made his disconnect from the otherwise “perfect” near-future setting all the more isolating and convincing but also to see that gradually morph into disillusionment and controlled outrage gave an otherwise high concept story the emotional grounding it needed.

While some characters feel like they are on the periphery, as it’s continually mentioned on the show they all “have a part to play” regardless of how reduced their role seems. But amongst the main players the two standouts have got to be Delores (Evan Rachel Wood) and Maeve (Thandie Newton). I could go on a whole spiel about strong, intense, kick-ass female characters but honestly they are so good in this that you cannot help but get excited about the inevitable confrontation between the two of them. The way they were able to make you sympathise with either of their motives and actions, or even flip back and forth between them, gives the audience the appropriate whiplash in which side to root for.

As mentioned earlier, season 3 still tackles some major philosophical ideas as well as timely social quandaries. Despite being outside of the park, there is still a directly connected through-line not only in the plot (a logical progression of the story on how does what happened in Westworld the park affect the outside world) but also in its overarching themes of power & control as well as free will. And it definitely has a statement to say about the current issues regarding personal privacy and data collecting.

Right now, we might all be thinking “if we have nothing to hide” or “but we upload so much about our lives anyway” then what’s the problem but like a lot of good science fiction Westworld takes the concept to a troubling extreme to test the audience’s preconceived notions and complacency. There is a minor danger that the issues it raises may get lost in all the “out there” sci-fi-ness of it all but honestly that cannot be helped (if people are complaining that Star Trek is suddenly “too woke” then I am at a loss to understand what show they grew up watching).

At only 8 episodes instead of the previous seasons’ 10, this is a much more straightforward arc with more forward momentum and less reliance on the muddled “time jumping” story telling technique we got used to from before. There are still flashbacks and “memories” to unravel in this mystery but it’s less of a “puzzle” that anyone has to solve and more of a slow reveal that is still bound to keep audiences on their toes. So in that sense it feels less taxing to think about the mystery and possibly easier to digest the message it’s trying to convey.

Because of that, some viewers may feel season 3 isn’t as “good” as the first two and I can understand that. I mean, the whole appeal of Westworld was, well “Westworld”. And yet it this still has all the elements and backbone that made the first two seasons so great and compelling and even if it were to a lesser degree that still means it’s still pretty good.

The few negatives I have to say about season 3 aren’t really that major and probably only effect the overall enjoyment by a matter of degrees.

The not-to-distant-future doesn’t feel as big as it should maybe despite the various locations we get to visit. There doesn’t seem to be as many people as there should be but that might simply be the realities of filming with extras in public. Also if you are familiar with many of those locations featured it can feel less futuristic I guess. Even so the money is all on the screen.

Shorter season also feels less satisfying. Some shows feel extremely drawn out especially with their slow pacing and filler episodes (*side-eyes Marvel series on Netflix*) but this felt over far too quickly. Some of the side stories, although served a purpose, were perhaps too much of a distraction or a deliberate red herring. And Delores’ revolution, at the end, seemed to be less complex than originally thought. It wasn’t so much a game of 3D chess but more of a role-playing game where you go here to collect this, take it to here, etc… actually that seems rather appropriate come to think of it.

Oh by the way, there are a couple of sequences after the credits of the final episode that set up for season 4 and I am curious as to how much of that was already done before or after they found out there was going to be a season 4.

For anyone disappointed by this season all I can say is to readjust your expectations as well as re-examine why you love this sort of sci-fi in the first place. Sure it’s not as mind-blowing as perhaps that first season, it’s definitely not as bloated as season 2, but Westworld season 3 is still enjoyable and is a logical continuation of a prescient story that we all should spend a little time thinking about every now and then.

If you enjoyed this review then please consider contributing to my tip jar at: www.ko-fi.com/oldtrenchy