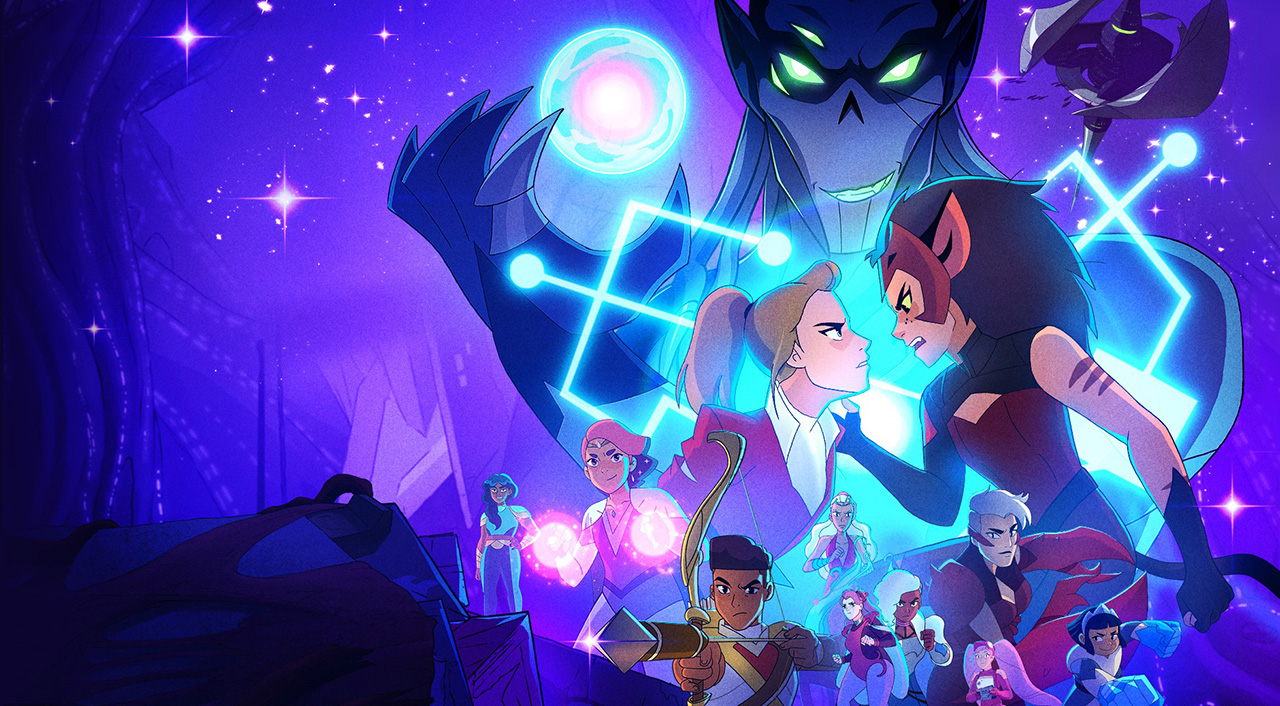 My first reaction to the finale was “Holy shit that was fucking amazing!” and I still maintain that. Season 5 of She-Ra and the Princesses of Power on Netflix rounds off a fun and fantastic series in a most thrilling and satisfying way.

Modern reboots and re-imaginings of beloved TV shows from decades ago (or any time for that matter) are fraught with danger as the fan base have a very specific idea of how and what their cherished favourite “should” be. I will admit having the advantage of not being as attached as many others. I never quite got into Masters of the Universe and the original She-Ra (only have a passing familiarity to it) so my mind was very open to a new incarnation, whose art style and tone seemed, on the surface, very much aimed at a much younger, female demographic.

And yet I enjoyed every moment from the get go.

From the vibrant energy and humour to the wonderfully diverse characters all within a sprawling and intertwining story, She-Ra and the Princesses of Power wasn’t just a kids cartoon but overall an awesome adventure series with such a positive vibe even in its darkest moments.

The fifth and final season does the classy thing and bows out while it’s still good and does so with an exciting story, tying of loose ends as well as a spectacular, and in some cases long-awaited, finale.

There may be MINOR SPOILERS from here on so be warned. However She-Ra can be streamed and binged in its entirety on Netflix right now.

For such a colourful looking show, it can certainly get dark and the start of season 5 launches with our heroes at their lowest: Etheria is being invaded by Horde Prime, Glimmer has been captured, the rebellion are being hunted down and overrun, and Adora can no longer transform into She-ra. Each season has a major change to the status quo and that offers up new ways for these characters to overcome challenges.

That’s one of the major aspects of this show is that it’s a longform story arc rather than an episodic show “for kids” and having a much broader appeal. There’s is a better sense of getting to know these characters as they grow and evolve and allows for the audience to invest in them.

That sense of growth and evolution is played out so well over the last few seasons but definitely pays off in this final season. Even without reading interviews with show creator Noelle Stevenson, you can tell there was a clear (albeit flexible) direction for the story and these characters that not only felt natural but also earned in mostly satisfying ways.

One of my other favourite things about this show that has been present from the beginning has been the diversity in not only the characters but also the voice cast. If you don’t like that word then just replace it with “variety” because that’s what it is and that variety brings so much to Etheria and these stories. Looking through that cast list it’s amazing to see all those names and faces, who all put in fantastic performances.

The way the characters interacted, how they fought and bickered with one another, characters with otherwise cheery dispositions sounding absolutely defeated, the messianic variation to Horde Prime’s intonations vs Hordak’s sinister rasp is my favourite in particular. I highlight this because, along with the story, it makes the show more than “just for kids” as these performances don’t talk down to the audience. It’s deliberate broader appeal allows it to tell the stories and messages it needs to without forcing it.

You feel for the characters and you can relate to them. That diversity allows for audiences to have at least someone they can latch onto and say “yeah I get that”. Whether it be King Micah projecting his nerves about meeting his daughter Glimmer for the first time since he went missing, Shadow Weaver’s need to be in control, Bow’s sense of betrayal, even Adora’s anxiety about who she “should” be… there’s something there for nearly everyone.

Of course the biggest thing about She-Ra is the LGBTQI+ representation (which extends into the voice cast by the way). Now I’m not qualified to speak in extended detail on this but one thing I missed and had to have someone else point out: Etheria doesn’t appear to have the concept of “the closet”. In fact, being gay seems matter of fact and it’s nice to see that two characters of the same sex are not fighting and struggling to admit their feelings for one another because of “societal taboos” but because they used to want to kill one another… and that’s surprisingly refreshing.

And that’s what’s so wonderful about this show and this season in particular that such things are so matter of fact. Admittedly, it’s in a sci-fi fantasy setting but for many marginalised groups what could be more fantastical than being allowed to exist the way you are?

Even if those elements are overt, that’s not “the point” of the show. Primarily, it’s a story of family, friendship. positivity, and love, and the ability to be able to express those things. Yeah, that sounds like touchy feely nonsense when I put it like that but when presented in this sort of sci-fi fantasy world it’s thrilling and fun without getting bogged down in the usual pretentiousness that fantasy has.

At this point I feel like I’ve been speaking about She-Ra as a whole rather than focusing on the specific final season and that may be due to how consistent this show has been. Season 1 was testing the waters but once they developed such a large and enthusiastic audience they went full into it to, again, tell a fun and fantastic story that got even a middle-aged cynic like me to enjoy (I’ve been wanting to make that sword since season 1 and kinda want to add the toys to my collection).

There are probably things I could nitpick: the art style still isn’t my absolute favourite (but I grew used to it by end of season 1), maybe one or two episodes this season felt like filler, some cool characters seemed left out from the ending, maybe the climax was a tad cliche (or it would be if I didn’t get a somewhat teary I must admit) but honestly, I had way too much fun to really let any of that ruin my enjoyment.

By the way, I have probably said this countless times elsewhere on social media but hot damn that theme song is an absolute banger and I love it so much! Also, I forgot to add, the subtle changes to the opening titles to reflect the changes within the show was a very cool touch.

She-Ra and the Princesses of Power ended its run in the most spectacular, fun, and satisfying of way, unlike a few other franchises that tripped over themselves as they get to the finish line. This is one of those series that exuded immense confidence in itself and the story it wanted to tell and it resulted in something absolutely magical,

If you enjoyed this review then please consider contributing to my tip jar at www.ko-fi.com/oldtrenchy