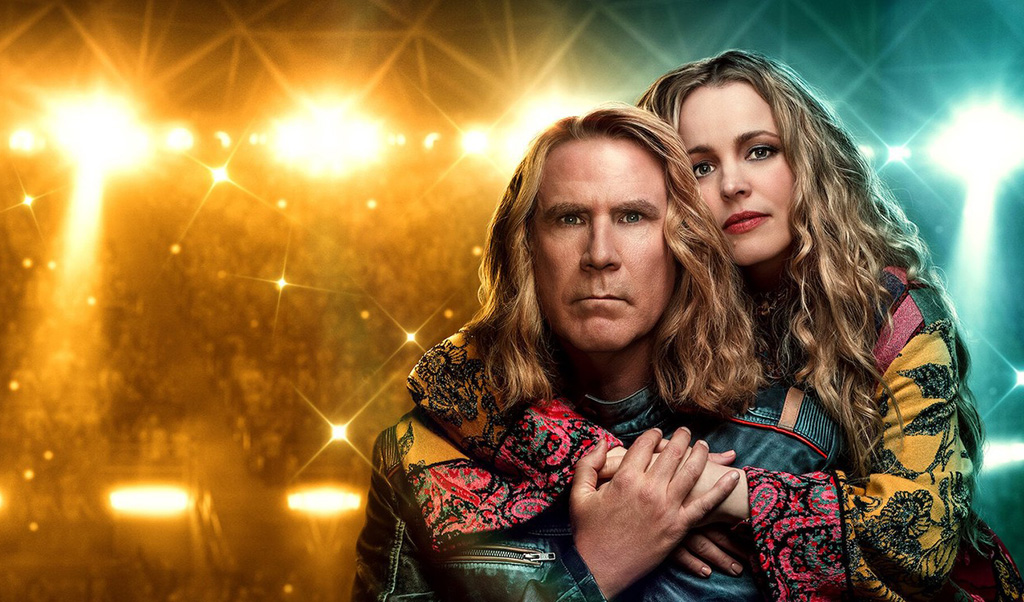 That is such a bizarre way to express it but in all honestly Eurovision Song Contest: The Story of Fire Saga was a lot of fun but once again I struggle to be glowing about a movie I enjoyed.

Overall, I genuinely had a good time with The Story of Fire Saga but thought it was let down by too many predictable cliches associated with these sorts of screwball underdog comedies, in particular of the Will Ferrell variety (which is often hit and miss for me but that’s more personal taste). However, being a huge fan of the actual Eurovision Song Contest, there were things to latch onto and really enjoy here.

The Story of Fire Saga is about a couple of childhood friends from a small fishing town in Iceland who dream of winning the Eurovision Song Contest and through a series of odd circumstances they get a chance to realise that dream despite everyone not believing in them.

Its release was meant to coincide with the actual 2020 contest but of course the pandemic scuttled those plans (I do wonder if these two would have rocked up for “real” during the broadcast?).

I must reveal that this took me two sittings to get through. I originally tapped out after the first 15 minutes because it was just not working for me but I went back to it over the weekend and pushed though… and I’m glad I did. Because once these characters actually arrive at the Song Contest it suddenly picks up!

Will Ferrell (as Lars) is surprisingly toned down by a few degrees from what I was anticipating, which works in his favour. It’s of course the standard Farrell character – overgrown child – but fortunately Ferrell steers Lars away from being overly obnoxious for the most part. And what would normally be a “straight woman” role to Ferrell’s “man child”, Rachel McAdams was delightfully charming as Sigrit. She’s just as dorky and naive as Lars, which makes the two of them work together more convincingly.

Being a Eurovision fan (I’ve been watching it for nearly two decades) the moment these two characters arrive at the host city for the Song Contest I was finally invested. I can only assume there was an original temptation to mock the Eurovision Song Contest but with Eurovison itself on board (I mean they were able to use all the branding and Jon Ola Sand, the European Broadcasting Union’s Executive Supervisor, was one of the executive producers on the film) it’s a rather honest and lovely homage to the Eurovision, which I appreciated.

But then again how do you mock something as wonderfully outrageous and outlandish as Eurovision?

The songs are so very pitch-perfect Eurovision and I really enjoyed them. Even the original video they released for Volcano Man looks like a legitimate contest entry. The contestants from other countries even looked and sounded like like actual Eurovision entries. To really hit home how much of a love letter to the Song Contest this seems to be, there are even a few surprise cameos from many past Eurovision contestants and winners in the “Song-a-Long” scene of the film, which is quite the highlight. Normally, I wouldn’t “spoil” something like this but it’s also not really a secret either.

And for those familiar with the BBC broadcast of the show in the UK, Graham Norton is even playing himself in the commentary booth in some scenes.

In the broad strokes, it looked like Eurovision however, like Lars being a tad toned down than expected, Eurovision itself looked a little toned down from what it really is (if feels odd that the area surrounding the pavilion would be so deathly quiet while the contest is on, which I thought was weird). And this is despite, as I found out later, the use of actual crowd footage from Eurovision 2019 that the production was allowed to film.

The story overall is cute, funny, and rather endearing but it’s full of contrivances that propel the story forward. It’s not about turning your brain off and normally said contrivances could be overlooked but it often felt like one too many convenient twists took me out of the story… and then one twist kind of explained it all.

And because of that the movie never really takes off the way that it could have, bogged down by well-worn tropes (which aren’t inherently bad just too familiar) and maybe a possible call to keep things safe. Ironically, the latter both helped and perhaps hindered the movie. Don’t get me wrong, I had fun with this. There was enough there to enjoy, I still have the songs stuck in my head, and I actually cared for a Will Ferrell character for the first time in a long time!

Also, this isn’t as quotable a film as Ferrell’s other offerings however I think those songs being ear-worms probably take over that role.

UPDATE: Since publishing this review, I’ve had the Fire Saga soundtrack on look for nearly an entire evening. In particular “Double Trouble“.

I did contemplate whether my love of Eurovision tainted my opinion of this movie but I reckon if I weren’t a fan I may not have even given this a look in the first place, let alone go back to it after those first 15 minutes where I gave up.

Eurovision Song Contest: The Story of Fire Saga is a lovely homage to the Song Contest that attracts hundreds of millions of viewers worldwide and is also a cute little story of a couple of dreamers. It’s enjoyable enough, it’s fun for a lazy weekend afternoon, it’ll have you humming Ja Ja Ding Dong for a few weeks.

If you enjoyed this review please consider contributing to my tip jar at: www.ko-fi.com/oldtrenchy