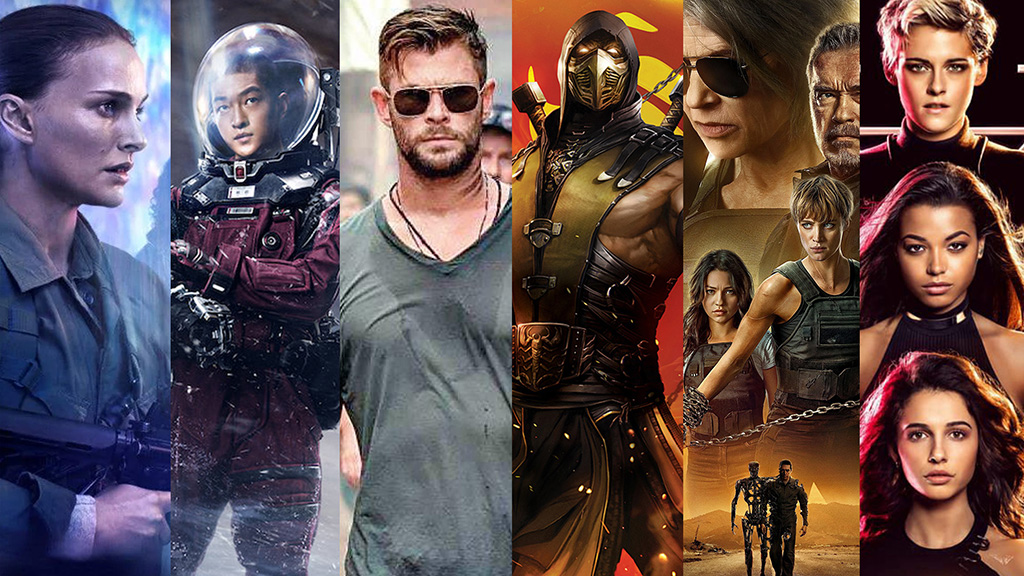 It’s now September and for many of us (actually all of us but some better than others) we aren’t out of the wood yet and won’t be fore a while. So it’s more staying in and watching movies.

Annihilation (2018)
This was released in cinemas and on Netflix almost at the same time and unfortunately bombed at the box office despite the mostly positive reviews.

What some may call “slow” I prefer to call “meditative” and that really adds to the atmosphere and mystery of this story., which gradually reveals itself over the course of the movie and… I think I understand the ending. My hesitation on that is because this film can be rather trippy at times and the ending is deliberately ambiguous. There’s a lot more metaphor and allegory going on here making it feel very old-school science fiction in its overall execution.

I enjoyed it and found it fascinating but it’s definitely not a light and easy sort of viewing.

The Wandering Earth (2018)
To avoid being swallowed up by the expanding sun, the governments of the world band together to push the Earth to a new solar system through use of “world engines.” But shit goes wrong.

The Chinese film industry’s attempt at creating a typical Hollywood blockbuster emulated all the hallmarks of such movies so well it even copied the bad parts too.

I really wanted to like this movie. From the moment I saw the trailer and its premise to some of the positive buzz, I was hopeful about it. I really admired the scope and ambition that the film makers had and I usually have no problem with simple, straightforward, or even paper-thin plots. I just wish they created likeable characters for me to give a damn about.

Okay so that’s not entirely accurate… ONE of the main characters had a lot of potential but the other one was so unlikable you wish he had died with all the other nameless background extras. And they introduce characters out of nowhere in the second half so there’s not enough time to even care about who the hell they are.

Without a likeable or sympathetic protagonist all the overwrought drama and over-the-top action, as well as it’s numerous endings and cookie-cutter characters just feel so much more obvious and jarring and bad. No amount of “turning your brain off” will make you care about what happens to these folks.

Extraction (2020)
I saw this the day it was released and in short: if you love action movies you’ll love this. Just go watch it now on Netflix!

Although it had the veneer of something a lot deeper, this really is a straightforward action movie, which is equal parts slick, thrilling, and exciting, all while effortlessly making the audience give a damn what happens to the characters (something I find more and more important to have in my media as I get older).

It’s certainly not as stylish as say John Wick but it’s just as energetic and brutal with more than a passing resemblance to Man on Fire in its premise (a film I also loved). The action sequences are amazing and the choreography is excellent (same guy who does the MCU films apparently?) and there are enough quiet moments in just the right spots to allow the audience to keep up with the movie. This is such a well-made film that I could easily talk more about it (there is a side character who has so much potential and charisma I reckon she should have a spin-off) but honestly if action is your thing then this is an easy one to recommend.

Resident Evil: Vendetta (2017)
I turned this one off at about the 17-minute mark, I was that sick of it.

Before 2019, I was only ever familiar with the Resident Evil series via the live action and animated movies (the former I didn’t particularly care for). The 2019 remake of Resident Evil 2 and this year’s RE3 was my first exposure to the games and I fell hard for them, making me a little more open to devouring RE content.

And that’s why I gave Vendettaa go when I spotted it on Netflix. Unfortunately. what little I watched of it was just so bad in terms of writing and performance (although I do wonder if it’s a case of American actors having to dub over a Japanese script). Mind you, I did see the previous two CG movies and don’t recall it being this bad.

Look, maybe I should’ve watched the whole thing before including it on here and maybe I’ll give it another go. But for my money watching game cut-scenes on YouTube are more enjoyable.

Mortal Kombat: Scorpion’s Revenge (2020)
If you, or your partner, have ever lost an erection during sex, then this movie recreates that experience for you.

Scorpion is one of my favourite Mortal Kombat characters but even I realise how over-exposed, over-done, and over-deified he in. He’s the Wolverine of the MK franchise. But still his origin story has been compelling for nearly 3 decades so telling his story is a great idea. Also, I have no problem with having another go at retelling the story of the original MK game especially in a more mature animated format (sometimes you’ve got to do it a few times to get it right).

So while these ideas are great in isolation, jamming them together is where we get this mess that undermines BOTH stories.

The gore and the brutality are visceral and enjoyable (especially if you’re a long-time MK fan), the humour (Johnny Cage in particular) is great and for the first hour you’re having fun and enjoying it completely distracted from all the weird and awkward choices because the good stuff is so good! The last 20 minutes are where it falls apart and you’re left wondering what the fuck just happened realising why this mixed approach that shifts the focus to Scorpion as a main protagonist, increasing his involvement in the events of the original story, was not only a lousy idea but incredibly stupid.

Terminator: Dark Fate (2019)
This is the sequel we should have had years ago. I remember looking forward to this and then that interest fizzling out (it was a matter of mood – sometimes going to the cinema feels like a chore) but I’m legit surprised at the general consensus and how many fell asleep on this one. Because this film is bloody good!

A bit of context: I didn’t hate Terminator 3 (faint praise), Salvation was fan-wank garbage, and Genisys wasn’t good but it was wacky enough to be entertaining.

Dark Fate, however, is a legit and proper sequel that picks up where Judgement Day left off (almost literally so, thanks to an opening sequence filled with impressively digitally de-aged actors).

I can understand how tired some are of this franchise thanks to those previous lacklustre attempts (including the well-intentioned Sarah Connor Chronicles that really added nothing). So there will be parts of this film that feel rehashed or a little too familiar but like T2 it attempts to flip the premise on it’s side to give a fresh take, which admittedly was watered down by said previous films.

There is actually a lot I could unpack about this movie including how I liked the re-framing of the premise, how the action sequences are excellent and would’ve raised the bar the same way Judgement Day did had this film come out earlier, how slightly disappointed I was it didn’t do more to comment on some of the real-world issues it was using as its backdrop, and that this story’s out of time protector, Grace (Mackenzie Davis) is the definite stand-out of this movie and I’ll be surprised if she isn’t doing more action movies from here on.

Charlie’s Angels (2019)
My favourite tidbit about this franchise is that every incarnation exists in the same universe. Yeah, they’re basically a continuation of each other, from the original series to the current movie.

This was another movie I was looking forward to but interest fizzled partly because I wasn’t making much effort to go to the cinema at that time (and yet the following year I went and saw Sonic the Hedgehog on tight-arse Tuesday). But I wish I did because this movie was a lot of fun!

However, there are a couple of issues that hampered this film and prevented it from being truly wonderful and iconic in the way its predecessors were. Firstly, the tone of the film was muddled. The fun parts were legitimately fun and the humour mostly landed for me but it wanted the crazy lightheartedness of the previous Drew Barrymore movies (who, by the way, was producer on this as her production company still own the rights) yet too much of it was dragged down but the more “grounded” elements. It felt like whiplash, as if you were stepping between two different movies from moment to moment.

This is basically the plot to the first Mission: Impossible movie and I absolutely HATED that movie for what it did to an original series character.

Having that done here didn’t feel so bad but that uneasy familiarity made the plot point feel very unoriginal and by association making it a bad twist even though on its own it shouldn’t be.

Apart from that the movie is quirky fun with some great characters and moments that overall really should’ve performed better.

The Shape of Water (2017)
Look, I’m as confused as the next person as to why it took me so bloody long to see this as I’m a big fan of both Guillermo del Toro and Doug Jones and even the premise intrigued me from the get go.

There’s really very little I can add about this film that everyone else hasn’t already said let alone the slew of awards it’s won but this is such a sweet and delightful film contrasted by the dark visuals as is on brand for del Toro.

It is a great subversion or alternate take to a story we’re so familiar with in the movie monster genre. It’s also one massive metaphor that’s so very easy to understand.

That’s it for now. There’s a few more movies need to catch up on and if some folks are still in lockdown by then they may make good stay-at-home suggestions too.