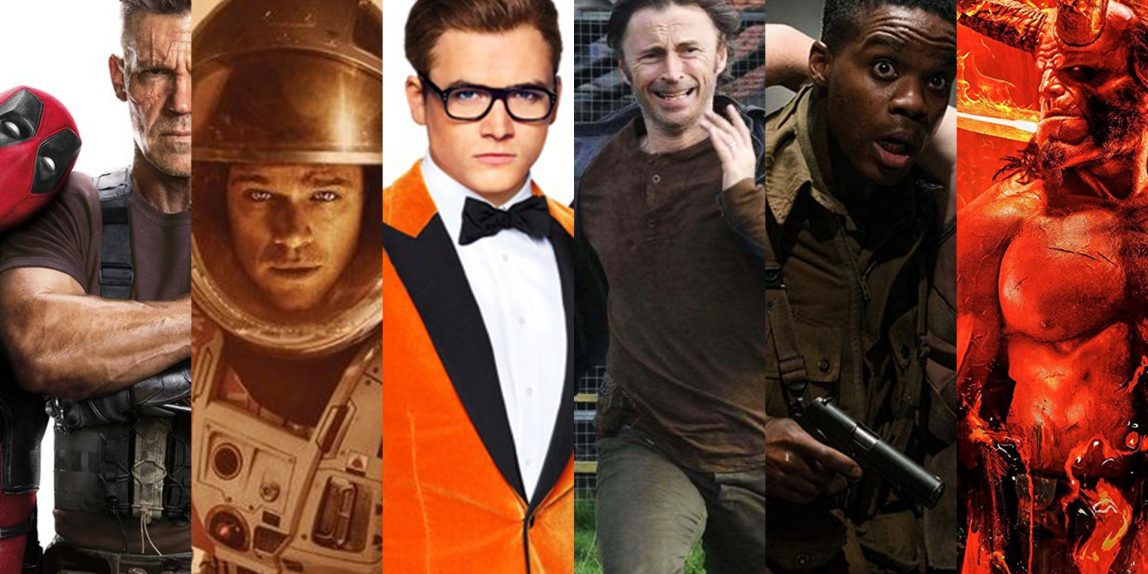 With Disney+ launching the Stars hub on their streaming service the other week (which is basically all the other stuff they acquired from Fox , many of which I talked about on previous Movie Catch-Ups) it’s time to catch up on a heap of films we missed the first time around…

Deadpool 2 (2018)
You know the complaint that some fans have about the Marvel movies being “too funny” ? Well, Deadpool 2 is that complaint tenfold and yet the fuckers ate it up without irony.

I really enjoyed the first Deadpool and there’s a lot I enjoyed about this movie too but it’s so bloody exhausting. While I can admire a sequel’s ambitions in wanting to do more, this film tries to do too much. There’s no balance, no ebb and flow, no sense of proper build up, just LOTS OF STUFF HAPPENING (almost as if this was made with the knowledge of the impending buyout by Disney so they tried to get it all out there as quickly as possible). Sadly Deadpool’s basic gimmick as a character was also overplayed to the point beyond obnoxiousness (obnoxious is the default) and the joke got old really fast. Unfortunately, the story suffers because of it.

Also for a character that is all about self awareness and breaking the fourth wall, the movie itself seems to lack a bit of self awareness when it comes to a few minor “problematic” elements (certain attitudes can change in the span of a couple of years).

I know that a second sequel has been announced by Marvel Studios (retaining its R rating) and maybe hopefully the new context in the MCU will give the gimmick some new life and balance.

The Martian (2015)
It’s weird to admit this but despite how much I was anticipating this film, even bought it on blu-ray, I kept putting it off because for some reason I was never in the mood for “hard science fiction” in the last five years.

And while I don’t regret taking so long I am glad I finally got around to watching The Martian because it’s a great film about one person trying to survive against the odds simply by being a problem solver. I mean that sort of understates the overall plot but when you break it down that’s very much the sequence of events as Matt Damon’s character proceeds to solve one problem after another. And while I am certain I wouldn’t be able to do what he did, as a simple maker and creative person, that’s a mindset I can at relate (or at least aspire) to.

With these sorts of movies there’s a temptation to dwell too much on the emotion and make that the core of the film, watching the protagonist slowly descend into madness or some such (and this film doesn’t ignore that entirely) but that’s not how astronauts are. Yet this film finds a way to not go down that path and still avoid being too cold and lifeless. It’s actually a great balance of drama, levity, and action.

Kingsman: The Golden Circle (2017)
I enjoyed the first film well enough despite a few things not quite working, The Secret Service got by on being a fresh take on an old genre as well as doing just enough to provide the story with a bit of heart.

The Golden Circle is a complete fucking mess.

It has all the ingredients for a great adventure but has forgotten how to mix it all correctly. Completely absent is the emotional core of the original and instead is an attempt to outdo its predecessor but in doing so undermines itself and even amplifies the worst aspects of the first movie, including the “unintentional” sexism of underwriting and undervaluing its female cast (being a parody of Roger Moore era Bond is no excuse). I would say this movie focuses on style over substance but even the “style” is crappy and half-cooked. Nothing about this movie makes me care about the story or the characters.

Also, having Fox News report on the impeachment of a heartless US president who was willing to let millions die from a virus. Fuck… how prescient, jarring, and incongruous all at once.

28 Weeks later (2007)
Another sequel I completely forgot about to a movie I recall enjoying (as well as being relevant to recent events). I don’t really do horror most of the time so it takes a lot for me to even give one a go.

I reckon it was around this time when the genre had run out of puff with 28 Weeks Later being the last truly good zombie flick for a long time (until the excellent Train to Busan in 2016). The grounded nature of the story makes for a frightening film but also serves as an allegory for certain political handlings even during the 2000’s.

Unfortunately, it does follow the frustratingly standard horror trope of the plot being propelled by the selfish and stupid actions of a few select characters (which makes rooting for them difficult to do) but overall it’s really quite thrilling and should have been more of a lesson in how NOT to handle a pandemic.

Then back over on Netflix right now…

Overlord (2018)
From one zombie film to another… and yes it’s very odd for me to choose horror films when I’m not a huge fan of them but give me an interesting premise and maybe I’ll give it a go.

Overlord is really quite good and features all the elements that we’re familiar with in not only a World War 2 movie but also a body horror flick. And it does it all very well. It’s action-packed, it’s thrilling and tense, and (your mileage may vary) potentially scary. Just don’t try to make sense of “the science.”

But it does have two major letdowns: the first is that it takes far too long to get to the reason for this film existing. The first 35 minutes are a straightforward war movie in the vein of Saving Private Ryan before it even begins to hint at its own premise. The way it drags out the mystery to build the suspense gets a little frustrating. The second letdown is that it squanders its own potential. Now this may be due to its relatively low budget but it isn’t as satisfying an experience as it could have been by a matter of degrees.

Hellboy (2019)
I really dug the first film starring Ron Perlman and then thought its sequel was “good enough” for me to want a second and final sequel. But unfortunately the studios had other ideas in mind…

This Hellboy reboot was re-added to Netflix recently and is another case of having all the right ingredients but ending up making a mess of the meal. There are scenes where I really enjoyed the fun tone they established, all the actors were fantastic with what they were given and I was especially surprised at how good David Harbour was as Hellboy, the visual and make up effects weren’t as bad as people had claimed (“serviceable” is how I would describe them), and there were moments where I had legit fun and a giggle at actual jokes.

Sadly, the story is complete fucking shite and so poorly told. The first act was a rather decent set up and introduction (even if the internal logic was a tad off) but at some point the movie forgets itself and by the time we arrive at the third act it suddenly remembers it had stuff to do, throwing random elements and plot points into the mix without satisfactory set up, all culminating in a pissweak climax. I cringed at certain scenes and moments that were recreated here (probably to better emulate the comic) but were done much better by Guillermo del Toro and the R rating that came about in the wake of the success of Deadpool – and just like we saw with that sequel – the aspects that required such a rating served zero purpose and do not make for a good movie alone.

As much as I loved the original film, this one had potential but failed in the most basic of ways… it couldn’t tell a good story.

Oh well, they can’t all be winners.