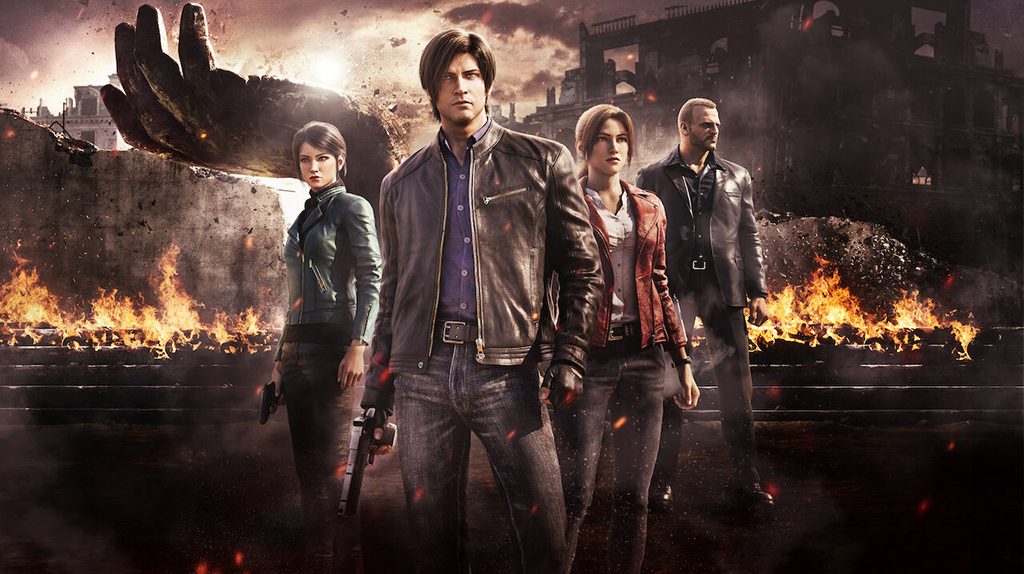 Playing more like a political conspiracy thriller than a zombie horror, Resident Evil: Infinite Darkness is rather enjoyable but something about it feels absent as if it’s missing the “meat” or “connective tissue”, which prevents it from being a solid narrative and instead feels more like a series of (very good) video game cutscenes.

I always seem to make this disclaimer for context but as far as the games are concerned I am very new to Resident Evil series thanks to the recent remakes, however, I’ve been dipping the toe into the RE media for years through the live-action and animated movies all with varying degrees of quality and success. In one of my mini-reviews from last year I talked about 2017’s RE: Vendetta and how I could only sit through 17 minutes it was so bad.

In contrast, I didn’t hesitate on Infinite Darkness, I was looking forward to it as it featured two of the main actors from the RE2 game remake reprising their roles of Leon Kennedy (Nick Apostolides) and Claire Redfield (Stephanie Panisello), which feels somewhat unique. However, I’m torn about the 4-part series, even though I enjoyed it well enough it was missing something that prevented it from being truly great.

Set in-continuity with the games after the events of Resident Evil 4, Leon Kennedy is assigned to a team investigating a zombie outbreak at the White House while Claire Redfield, as part of a not-for-profit helping rebuild a small (fictional) middle-eastern nation in the wake of their civil war, discovers similarities to what happened to her and Leon in Racoon City nearly a decade ago (RE 2) and of course both their paths link back to a larger conspiracy.

Trite as it may be, that’s not a terrible premise and it does unfold in an interesting enough manner but it being anime means it takes on a little too many anime tendencies in its storytelling style (which I’m already adverse too in the first place). For all the good looking animation, it does spend a great majority of its run time with just two people talking (an animation cost saver), which feels rather bizarre considering most of it is motion capture.

The performances are all great, there is a good reason Apostolides and Panisello were brought back to reprise their roles from the game. The script is fairly straight-forward in emulating political thrillers more so than a zombie shoot-em-up but it still works even if the audience can solve the “mystery” by the second episode. The animation is pretty good although I would clarify that the rendering and art style are gorgeous while the animation itself has a few janky moments more in terms of how it’s incorporated/composited, some mocapped acting gestures feel too big for the moment. But those nitpicks are few and far between.

For me the biggest issue is that Infinite Darkness feels as though it’s missing something, some “meat”, some “connective tissue” that would have given the story a little extra “oomph” and made it more exciting and compelling. And a part of the reason for this absence of “oomph” comes down to how Infinite Darkness is presented.

These four episodes, which run for about 22 minutes each, all seem as though they were originally meant to be a single movie. I mean four short episodes for a season feels mighty bizarre in the first place and are really easy to do in a single sitting. But chopping them up somewhat dilutes the flow of action and character moments.

And because the focus appears to be on political intrigue rather than killing zombies, the action also feels sparse. This is why I compare it to watching the best video game cinematic cutscenes you’ve ever come across, missing a lot of the stuff that is normally reserved for gameplay. There’s even a typical Resident Evil boss fight in the climax with all the usual ingredients except for a drawn out battle, and instead it’s a lot of talking and reacting to things.

And that’s the most frustrating thing about Infinite Darkness, none of what we get is actually bad, it just feels like it’s missing gameplay. Had it been presented as a single movie it may have help a little bit but that still doesn’t resolve the lacklustre climax.

What’s missing from this is the difference between being good and being great. If you are not an RE fan then this will fall completely flat for you and a lot of the heavy lifting does seem to come from the carry over from the recent RE2 remake with the two leads reprising their roles.

I did enjoy what was presented, tropes and all, but I just wish there was more to it that would have elevated the story to be more compelling and more thrilling.