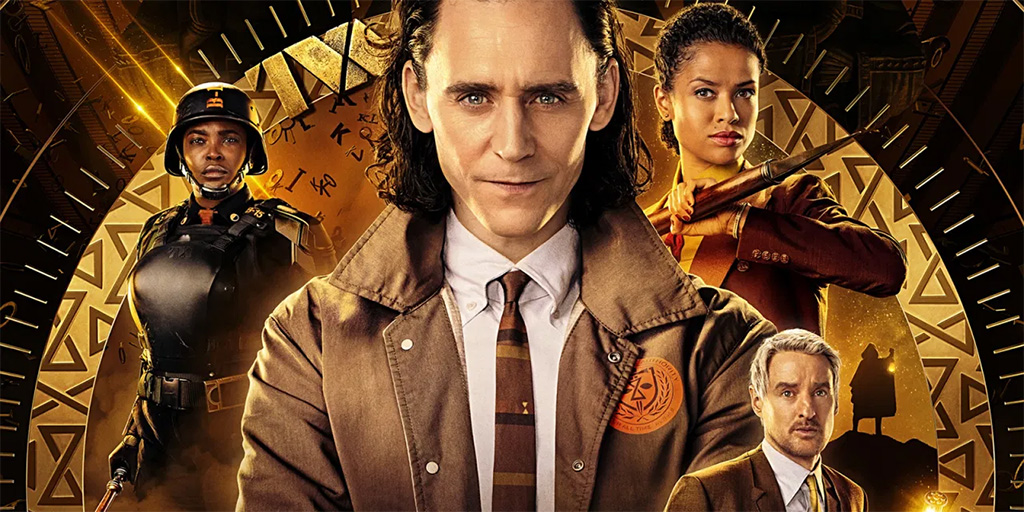 Loki continues Marvel Studios’ success in bringing big screen quality adventure to the small screen with its high concept premise and more room to breathe for its characters. The six-part season 1 is compelling and fun while helping to set the ground work for the Marvel Cinematic Universe trek into the multiverse.

I didn’t write a review for The Falcon & The Winter Soldier mainly because by that time so many people were already watching these Disney+ shows I felt as if there was no need to convince anyone on it nor space to provide my own opinions (I really enjoyed it for what it’s worth). It’s a similar situation with Loki, however I think there is still some sort of perspective I can at least provide to some folks that may be iffy about it.

The series begins right at the moment in Endgame where the Loki (Tom Hiddleston) who was captured in the first Avengers movie escapes with the Tesseract. He’s quickly captured and brought to the Time Variance Authority (TVA), a bureaucratic organisation that deals with rogue alternate timelines in order to maintain the “Sacred Timeline.” He’s been saved from “pruning” by Agent Mobius (Owen Wilson) in order to help him hunt down a rogue “variant” who has been killing off other agents.

And that right there was a premise that got me hooked from the get go. Similar with WandaVision, I was instantly drawn to the quirky and out there nature of the story. And when they have Disney and Marvel Studios money behind them instead of just the television division then of course they can swing of the fences and bring the cinematic quality of the MCU to the small screen. For my money (monthly subscription) they certainly achieved that.

MILD SPOILERS FROM THIS POINT

The mystery of the TVA, who the rogue variant is, as well as the truth of what’s going on are all genuinely compelling. Sure, your mileage may vary on just how mind-blowing they are but the twists and reveals are great and definitely keep my attention. But more importantly, the characters are absolutely engaging and are the core of what makes this series work.

In actuality, that’s the secret sauce of Marvel Studios’ success. These characters are all appealing and have various levels of depth and interest to whole swathes of the audience and when you consider the number of characters inhabiting the MCU then there’s bound to be someone that fans can either relate or simply latch onto. Hiddleston’s Loki is one of the more obvious examples of that and his performance is fantastic as well as the rest of the cast. Owen Wilson is one of the more interesting casting choices but definitely one that paid off as Mobius immediately works well bouncing off of Loki. Sophia Di Martino as Sylvie is one of my personal highlights of the series as she too works so well being not just at being Loki’s foil but also the two characters end up complimenting each other quite well.

Side note: when one of my favourite actors, Richard E Grant, popped up as “Classic Loki” I did have such a delighted giggle.

I also want to quickly highlight how much I love and appreciate the retro aesthetic of the TVA. It helps to enhance the “out there” as well as the “outside of time” notions the place is supposed to have as well as emphasise the bureaucratic nature of the organisation. Also, the batons the TVA use almost remind me of pencils (because they’re “Pencil pushers”) and the end of the pencil is what they use to “erase” the variants. It’s not a perfect metaphor but I amuse myself with that.

Here’s the other thing to remember: this isn’t MCU adjacent or wishy washy as the other Marvel Television stuff, this IS part of the Marvel Cinematic Universe so all their casting choices have the potential to end up on the big screen at some point so they have to be making great casting choices.

This version of Loki works very well and it’s important to remember that it is a different Loki too as the “original” already died in Infinity War. Confusing as that may be (and I’ll admit it took me slightly longer than it should to grasp the time travel rules as spelled out in Endgame), this is a clever and fun way of introducing the multiverse as well as setting up Phase 4 going forward. And the idea of “variants” also allows for all sorts of possibilities as well as watering down the gatekeeping of canon in fandom. I mean, it’s also a nice way to easing non-comic readers into the concept of What If? that is also soon to premiere on Disney+.

The challenging of concepts like “free will” also plays into this meta-narrative, I think, about the supposed stringent adherence to source material that certain fans can’t seem get over despite the fact that Marvel Studios has always been about distilling what works best for the big screen as well as updating and re-interpreting for contemporary audiences.

It also means that this Loki can do different things and can get to his “redemption” point faster than the original god of mischief, or even find someone to love, all because of the different path he’s taken as well as the information he’s been exposed to. For all the deaths in the MCU this is a great way to re-utilise actors or even recast if the need arises.

And yes, even the whole Loki and Sylvie thing worked so well for me too. Again, keeping in mind this is a different Loki to the one in the “sacred timeline” and so he’s made different choices and seen different things. Many are stuck on the “morality” of such but honestly as story telling goes I think it was fantastic.

So for anyone that is heavily invested in the original character then that is how to envision this character.

I only have a few minor gripes about the show. Most notably that it was only 6 episodes long this season (before it was revealed a second season was on the way to possibly answer the cliff-hanger). And audiences all expected the finale to resolve everything. Speaking of which, episode six did feel as though they were dragging it out slightly, extending the mystery instead of just getting to the denouement, which technically there wasn’t one just more questions for us to grapple with.

But those really are minor nitpicks and I don’t think they did six episodes as a last minute choice. Marvel Studios know full well how popular Loki and Tom Hiddleston are and keeping fans invested and wanting more is very deliberate.

Overall, I just had a really fun time in this new part of the Marvel Cinematic Universe unravelling the mystery as well as the potential of the multiverse. You don’t need to be a comic book fan to get into this one nor do you need to watch the other Disney+ shows to understand this however this feels more like a requirement for anyone that loves Loki or the MCU in general. Most of the time you’re only made to feel like you have to watch everything when in reality most of the movies are fairly self-contained sequels but this makes for a great introduction to the new concepts and what is going to happen going forward.

I am so pumped for season 2 and well as what Phase 4 has to offer.