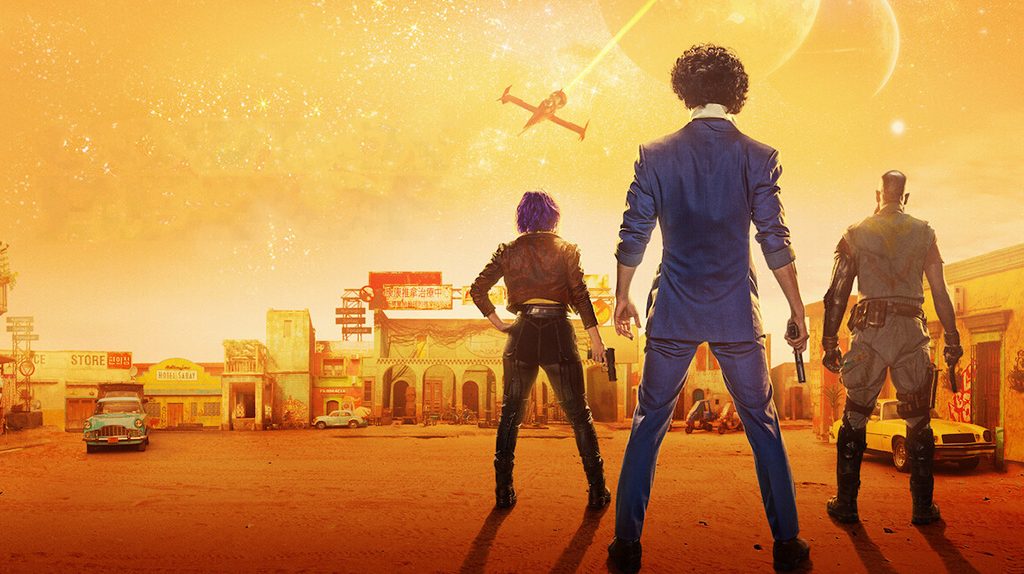 The live-action adaptation of Cowboy Bebop is a heap of messy and anachronistic fun and is enjoyable for the most part but its biggest flaws, ironically, come from its hard adherence and fidelity to the original anime.

I remember watching random episodes of the original Cowboy Bebop back in the day and then trying to catch up with it again when it was airing on television here in Australia over a decade ago. It was my attempt to get into one of the most revered and beloved “gateway” animes of the time and while I didn’t mind it, it never really stuck with me (which is the case with a lot of anime) so I don’t have much attachment to the series. The Netflix adaptation drew my interest for a handful of reasons: the tone and visual style, John Cho, and just morbid curiosity.

After binging the first season in a single sitting, I’m apparently in the minority who really enjoyed the show despite all its flaws. Mind you, people just want to know if it’s good are bad and my answer is: it’s okay.

Cowboy Bebop follows Spike Spiegel (John Cho) and Jet Black (Mustafa Shakir), two space cowboys chasing bounties across the solar system aboard their ship the “Bebop”, encountering all manner of colourful characters including fellow bounty hunter, Faye Valentine (Daniella Pineda). But Spike has been keeping his past with the criminal organisation, The Syndicate, a secret from his partner, which they eventually become entangled in putting all their lives in danger.

The most striking aspect about the live-action series is its visual style and it is indeed very stylish. Its designs take after the cyberpunk aesthetic from the series (which here leans toward The Fifth Element when in the space scenes and Blade Runner in certain planet-bound scenes) and so many of the futuristic sets look appropriately cluttered and lived in. Some episodes follow a more “detective noir” aesthetic to tell its story and some are shot like 70’s black exploitation films and “spaghetti westerns” (if you’re familiar with Quentin Tarantino films then you know what this looks like). For some, this pastiche may feel jarring (kind of the point of the original anime… and cyberpunk in general) however, its very presence and usage does heighten the fun and visuals of each episode.

However, that’s not to say that it all works. Without looking up the numbers, one suspects that the budget may have undermined the ambitions of the filmmakers (either that or the pandemic limited how they did things despite being filmed entirely in New Zealand). While some episodes look cinematic (when it looks like they’ve shot on sound stages), anything shot on location ends up looking like a CW superhero show. Some of the colonies the crew of the Bebop visit mostly resemble old world townships like a stereotypical Mexican town or a classic 60’s retro throwback and that’s really cool but instead of futuristic vehicles one might expect for a 2071 setting, they all use cars that come from decades in our past.

Although it must be pointed out that anachronism of some of these design choices may also be deliberate considering most of the weapons are still very familiar contemporary firearms as well as the super-futuristic satellite casino still using tradition slot machines all just like in the anime. Similar with the quality of the action scenes but that it may be to match the style being shot. There are typical western shootouts of course, some of the sci-fi elements look the part, but also the hand-to-hand combat often looks like the aforementioned 70’s exploitation films. There’s also a fight sequence that’s made to look like a “single take” that is quite cool and stylish.

The cast are all really good considering what they were given to work with. Cho gets to show off once again how fantastic of a leading man he is and he’s very charismatic as Spike. Him and Shakir’s Jet Black have a great “buddy cop” chemistry as partnered “cowboys” and Jet does great with balancing being an ex-cop and divorcee that needs these paid gigs to be able to provide for his daughter. Pineda’s Fay Valentine is just the right amount of annoying without overstaying her welcome (unlike the original anime) as well as being a convincing bounty hunter in her own right. I really enjoyed the sense of humour of the writing even if some jokes don’t always land and that often helps with the interactions between our three main cast to make them rather likeable.

Given more screen time than his original anime counterpart, Vicious (Alex Hassell), Spike’s former partner and now Capo (lieutenant) for the Syndicate isn’t “quietly sinister” but he does do his namesake rather well as he becomes increasingly unhinged as the series goes on. Julia (Elena Satine) is also given more to do in this series and there is an attempt to flesh out her character to be more than just the middle of a love triangle.

There are a heap of supporting characters that are a bit of a mixed bag and your mileage may vary on a few of them but I tend to see them as performing (or over doing it) based on the tone of the episode.

There are plenty of substantial overhauls in the Netflix adaptation and not just with how characters are depicted and cast but also with plotlines and stories from episodes shifted around and repurposed. For my money these changes are vast improvements over the originals and fit in with the tones of the live-action series. I say “tones” (plural) because it can jump around from episode to episode. It can go from wacky, light-hearted adventures to deathly serious and dour causing some whiplash.

There is truth in the observation that translating a story from one media to another requires more than just copying it verbatim because the two mediums rely on different elements. With Cowboy Bebop, it’s not just a matter of adapting from animated to live-action (although both visual mediums there are differences) you also have the extra challenge of translating something from Japanese (which is why there’s a dub vs sub debate but it’s more than just language) as well as adapting something from over 20 years ago.

There’s no doubt why the original anime was so popular and successful when it was first released back in 1998. But having done a bit of a refresher in anticipation of the new show, not all of it has aged particularly well. The changes the Netflix series have done are not only positive but vital for any media in 2021, addressing a lot of the problematic depictions of women, the mild sexism, as well as the casual racism of the original (this sort of thing is also why a lot of reboots and remakes happen) as well as just making some of the plots more interesting and punchier, fitting in with the overall season arc.

This adaptation is copping a lot of crap from fans and critics, with many saying the writing is bad, or that the show “misses the point” of the original and I would have to disagree almost completely with that. I know I’m going to be alone in this but curiously, the issue that prevents this from being truly fantastic isn’t to do with the changes from the source material or not understanding it, ironically, it’s due to the ardent adherence to it.

The challenges of adaptation as listed above are delicate also because you also have to know what to change and how to adapt it. The changes are what make Cowboy Bebop fit in with 2021 sensibilities. The only criticism I may agree with about live-action adaptations is that it’s tough to translate anime sensibilities. However, my take on that observation is that not all anime sensibilities are good for storytelling (think of the numerous exposition dumps that are just a single still frame extended over a period of time to cut down on animation, which goes against the “show, don’t tell” mantra).

Marvel Studios’ success and appeal has been based on distilling what works with their characters and stories and trying out things that are appropriate for a contemporary audience. And so it doesn’t always match how they were originally conceived so many decades ago, instead they offer the best version. With Cowboy Bebop, the showrunners have gone halfway there with making some appropriate changes but they haven’t done enough distilling for the best version they can find. Actually, the appearance of a certain character seemingly 1:1 straight from the anime to live-action has fans reeling in horror but… that’s what they demanded.

And that’s unfortunate because it gives further ammunition to all the fans that found any excuse to complain about this show even before seeing it. Remember these are the same “weebs” that complained about the casting of a black actor for Jet, the same pervs that complained that Faye’s costume wasn’t revealing enough, as well as the same “fans” that hate anything they regard as “woke” (the overhaul of Gren as well as the appropriate casting of non-binary actor Mason Alexander Park was a positive move) and so that pretty much makes any of their opinions bloody worthless, as far as I’m concerned.

The Netflix live-action adaptation of Cowboy Bebop is a fun, stylish, and enjoyable time with a trio of loveable cowboys I want to see more of but it is dragged down by its anime origins keeping it from being truly spectacular. In any case (and I really hope they go through with it but it doesn’t seem likely now) I am looking forward to a potential season 2.