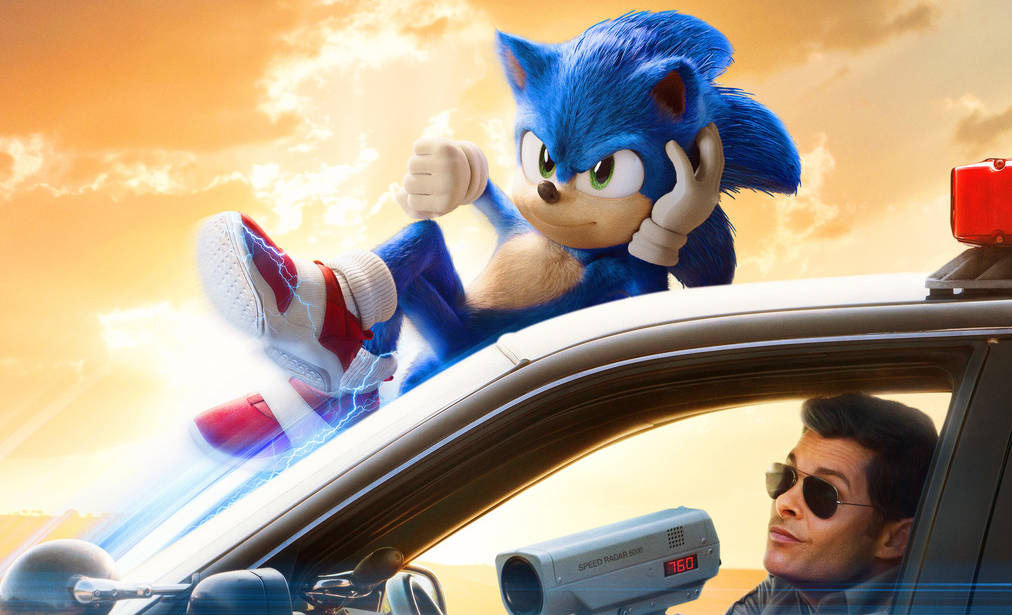 The live-action Sonic the Hedgehog movie is overly safe, paint-by-numbers, family-friendly fare and yet it’s actually a lot of fun and a surprisingly heartfelt movie.

A lot has been made about this movie in its lead up, particularly the brouhaha in regards to the terrible original design they revealed for Sonic, the reactions to which led to the film being delayed while they redid his look. Whether it was successful I’ll get to in a moment but that sort of pressure of expectation was always going to play against this movie.

Speaking of expectations… I was a fan of the games in the 90’s but always begrudged how the ancillary media (cartoons, comics, OVA) over the last couple of decades never quite captured what I loved about the original games in a satisfactory manner, whether it be in regards to “lore” or presentation or even just being entertaining enough. However, plenty of other fans lasted a lot longer than I did and they have their own favourite versions. So once again the pressure of expectation was upon this.

In all honesty, I was surprised by how much fun I had with this movie. I dislike the idea of “lowering one’s expectations” but instead I prefer to “manage” them and well as managing my intentions in regards to what I want to get out of the experience.

This is first and foremost a kids movie. It’s familiar family-friendly fare with a plot that many have (quite rightly) described as “reheated” from other films like The Smurfs for example, but I didn’t have a problem with it and it works well here. Sure it’s a tad predicable and there are a some minor leaps in logic as one sometimes finds in these sorts of movies aimed at the little ones but again it’s one of those instances where it matters very little in the overall enjoyment.

One major element that helps all this has to do with Sonic’s design. No, it certainly doesn’t make the story itself any “better” but it does assist in making Sonic more relatable therefore easier to invest in the story. It’s not that his design is “more accurate” (even though it is), it’s that he looks more endearing along a similar vein to how the internet’s ovaries collectively exploded over “Baby Yoda”. That endearment allows the audience to more easily empathise with Sonic’s character and plight meaning the stakes have some meaning… if only by a matter of degrees.

Ben Schwartz adds to this with an energetic performance as the voice of our titular blue hedgehog that surprisingly doesn’t outstay its welcome despite all the jokes and pop-culture references (which normally would get old rather quickly). With the cookie-cutter nature of this movie goes some very standard recognisable casting, with James Marsden in the main human role (he did a similar film, Hop, nearly 9 years ago) to the “war room” being filled out by the regular go-to older actors you always see as the military brass.

The stand out of course is Jim Carrey as Dr Robotnik. Now, I grew tired of Carrey’s gurning and flailing by the end of the 90’s however it was fun to see him back at it again after so long. Your mileage may vary but it almost felt as if his over-the-top physicality was more controlled and measured this time around and it made for a welcome return. For die-hard Sonic fans it won’t be the Robotnik (or Eggman – blergh) you know from other media but how that character develops works for me to maybe become that.

Without spoiling things, the characterisations of both Sonic and Robotnik intrigued me in the way they are diametric opposites: Sonic is lonely and has learned to cope with it by pretty much talking to himself a lot but still yearns for friendship. Robotnik detests people because he’s incredibly smarter than everyone else and keeps vaunting the evolution and potential for robots.

It’s a funny movie, enough to entertain young and old and that third act (again as corny as it is) worked out better than I had anticipated. It feels like a smaller film than it should particularly because it’s intro (and mid-credits sequence) all hint at something much bigger. There are also plenty of easter eggs for the long-time Sonic fans to spot and the moments of nostalgia are lovely and cute.

Some of the visual effects look a tad off but I could forgive that. Although a few of my favourite moments include the way they depict Sonic’s super speed in the same manner they did for Quicksilver in the later X-Men movies.

The film’s inability (or refusal?) to swing for the fences is what holds it back. The safeness and lack of risk taking prevents it from being a truly amazing and compelling story, again made even more obvious with how that intro hints and alludes to a much bigger, more interesting “faithful” story that’s not being told… yet.

However, to dwell on the wasted potential is to undermine what it did right even if it was sort of on the baseline of “fine”. The likes of Pixar have well and truly shown us just how good and compelling family-friendly films can be and superhero blockbusters may have raised our expectations in wanting everything to be an event when we visit the cinema. Fair enough too but we sort of forget “good enough” isn’t a bad thing.

While this movie has been getting a lot of positive reviews, some have been less than charitable for the aforementioned wasted potential and I can understand that. However, there’s a certain segment of critics that have been heaping on the vitriol as a counter to what this movie represents in regards to the design change.

Many have misguidedly tried to rally behind this movie because of the way the studio bowed to the public’s horrified reaction to the original designs, claiming the effort to redesign him as a positive (I have complicated feelings about “listening to fans” sentiment in general). The naysayers are worried what sort of precedent this has set, which I sort of agree with. In any case the studio responsible for the visual effects in this movie (as well as other films such as The Lion King and elements of Detective Pikachu) had closed its Vancouver studio not long after completing this feature. It’s a rather complex situation but it does put a sour note on this.

All in all, I find it difficult to muster up the energy to be angry about much of this stuff and I cannot deny how much I enjoyed this middle-of-the-road effort. It’s safe, inoffensive, corny as all hell and will make any 8 year old lose their mind. I kind of think that’s the goal right there.

It’s potentially forgettable but Sonic the Hedgehog is also a lot of fun and genuinely heartfelt. As a fan from back in the day, I’m adding this one to the blu-ray collection (maybe on a sale day).

If you enjoyed my review then please consider supporting me by heading over to the tip jar and dropping a few dollars: ko-fi.com/oldtrenchy