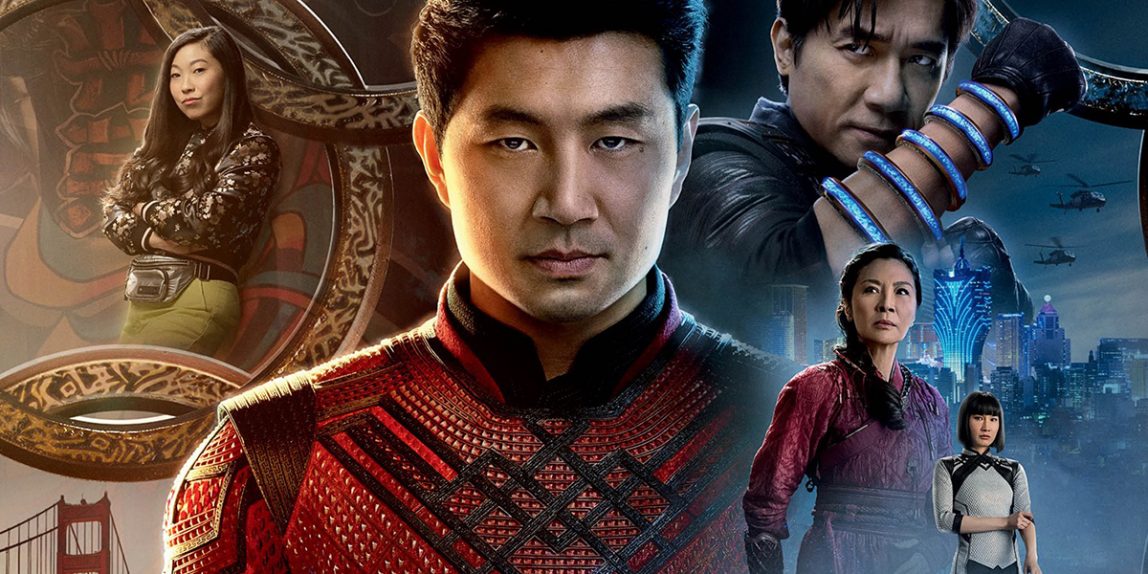 The mix of Hong Kong style martial arts action with the Marvel Studios quality of spectacle, Shang-Chi and the Legend of the Ten Rings is an amazing and thrilling adventure introducing and fleshing out brand new characters for a good and proper start to Phase 4 of the Marvel Cinematic Universe.

I need to amend something I said in my Black Widow review, although it does move a couple of chess pieces around in anticipation for upcoming stories, it was always meant to be a palate-cleanser post-Endgame. Its delay of nearly two years created the illusion of the beginning of the next phase. When in reality, Shang-Chi and the Legend of the Ten Ring is the true introduction kick-starting Phase 4.

After spending the last ten years as a “slacker” running away from his past, it soon catches up with Shang-Chi when his father, the true head of the Ten Rings organisation, sends soldiers to retrieve him and his sister, Xialing.

I’m going to leave the synopsis there because the story is rather straightforward with a few reveals and surprises I don’t want to spoil. The movie does an excellent job at introducing these brand new characters and seamlessly incorporating them into the MCU (we’re a long way from “magic is advanced science” of Phase 1) and while there are connections and references littered throughout, most of the housekeeping regarding the larger MCU are saved for the mid and post credits scenes (yes there are TWO, stay for both because they are potentially substantial teases).

Shang-Chi also disproves the idea that people are “sick of origin stories”. As I have been saying for ages, the criticism was always disingenuous and based solely around two origin stories (Spider-Man and Batman) that kept getting rebooted. This is out and out an origin story in the vein of films from the first phase of Marvel Studios’ “cinematic experiment.”

The performances are pretty much what we expect from a Marvel Studios movie (I have to be very specific to clarify that part) and everyone is here with their A-game. Shang-Chi (Simu Liu) makes for a charismatic hero balancing the “every-guy who just happens to be really good at Kung Fu” in a convincing manner. I’m glad to see they’ve avoided the cliché and Katy (Awkwafina) is not the love interest, instead she’s the BFF/comic relief sidekick, which I not only find refreshing but she has her own arc in this film. As much as this is Shang-Chi’s origin story, it’s also that of his sister Xialing (Meng’er Zhang making her feature film debut) and seeing her go from a stoic to vulnerable like a flick of a switch is fascinating.

Television actors and newcomers aside, when you’ve got Disney money behind you, you better be swinging for the fences, so casting Asian cinema royalty in the form of Tony Leung and Michelle Yeoh (the latter has had a late career resurgence even before this) brings gravitas to the film. Jiang Nan (Yeoh) is a strong yet gentle mentor, which makes for a nice change from the “dragon lady” characters she’s been given of late. And surprisingly, WenWu (Leung) is also depicted as seemingly more sympathetic father (for the most part) than one would expect for the long-lived warlord and leader of a criminal organisation and yet you still feel the authority he brings to the role.

For anyone disappointed by the portrayal of “The Mandarin” in Iron Man 3 (which I still love – it was the very first post-Avengers palate-cleanser) then you may not be fully satisfied by this version either despite it inching “closer” to the source material (or a version of it). Like IM3 it continues to “hang a lantern” on how problematic and outdated that “traditional” portrayal is (I mean they literally talk about it). For my money though, this is the way to do it and it works so well. I also love how the actual ten rings of power are depicted in this movie as bracelets rather than rings on your finger. It offers a much more spectacular visual theme to work from.

(SIDE NOTE: I do recommend you head to Disney+ right now and check out the Marvel One Shot All Hail The King if you haven’t already has it’s an amusing reminder and primer for this film. It was filmed at the same time as Iron Man 3).

Also, your mileage may vary on “Morris” but if you liked Porgs or Baby Yoda then you are likely the target demographic.

The MCU films have never just been one thing, they tend to experiment and adopt different styles and genres depending on the story and characters (The Winter Soldier was a spy thriller, Ant-Man was a heist movie, and we’re about to get into horror with the Doctor Strange sequel) and so delving into martial arts is the latest taste of that genre buffet (Iron Fist doesn’t count), which they’ve done effortlessly well to emulate the Hong Kong action movies of the last few decades.

The film is dedicated to one of the supervising stunt co-ordinators and 2nd Unit director, Brad Allan, who passed away in early August. He was the first Aussie to join the Jackie Chan Stunt Team in the 1990’s and worked in Hong Kong cinema for 10 years before taking those skills to Hollywood. His work along with the rest of the stunt team are why this film feels very familiar for anyone who grew up on these sorts of movies.

But for all the talk of action (which does culminate in a massive CG-laden spectacle in the third act climax), this film does an excellent job in balancing all that with quieter character moments. This has been a staple of MCU films because they always remember that you have to care about these characters in order to be invested in what’s going on. Even the somewhat jarring “dinner with the estranged family” is actually a lovely parallel to a “moment in the life” type of breakfast scene in the first act.

Shang-Chi does continue the MCU’s persistent theme of “daddy issues” so it’s all familiar territory here.

Director Destin Daniel Cretton has been able to construct a very tidy and lean story. Possibly too lean, which leads me to my first nit-pick. While little to nothing is wasted or dwelled upon in too overwrought a manner there are sequences that go at quite the clip so there is little space between set up and pay off. I try not to invoke overused criticism like “pacing issues” (which sadly now lack meaning along with “plot holes” or “bad writing”) yet there are times where the story just moves on to the next thing without much dillydallying.

Also, like some previous Marvel films, certain characters have been built up more than their importance in the film suggests. This is a combination of the way comics work (you need a huge roster of villains, for instance, to have your heroes fight someone new every issue) as well as the way the internet hypes up the wrong things. Just think of these as either cameos (where appropriate) or a standard bait & switch/twist that movies without source material often do.

Filming was interrupted by the pandemic even though Australia has been better than most other places around the world in the previous year. So despite there being full-sized outdoor sets built there are scenes that felt smaller than they should be.

Finally, and this is perhaps personal taste, while the film does a good job of illustrating the past of the Ten Rings group I’m not sure how much influence it might have during the events of this movie. I’m not certain I felt that come through properly.

But as is often the case, my overall enjoyment pretty much overrides any nit-picks and minor criticisms I may have. And I bloody loved this movie!

Some may point out that the “first Asian-led superhero movie” being a martial arts flick feels too on-the-nose but in my opinion it almost has to be. It’s similar to Black Panther in that these films need to sometimes lean into certain genres and archetypes (without perpetuating the harmful ones) in order to be more palatable and easier to consume for certain audiences especially considering how some attitudes have seemingly moved “backwards” in recent years. There’s some level of “compensation” to get back on track in progress.

Also the character is from the 70’s, almost the height of the martial arts craze in the west. There are some things you just have to do or at least interpret so you might as well do it with the right people.

We’ve spent decades consuming Hong Kong action cinema, Hollywood appropriated a lot of that (the aforementioned 70’s and 80’s martial arts craze as well as the early 2000’s being an awkward time thanks to The Matrix) but that’s not the same context as to what is being presented here. Here there is a balance where audiences are receptive to not only a predominantly Asian cast with Asian themes and sensibilities but when it comes to diverse representation on the screen there’s also very much an Asian-American component too. Being Asian-Australian myself that’s a somewhat similar thing but context is always an important one to remember when it comes to such things. This isn’t a “fish out of water” story in the traditional sense (Awkwafina’s character and hidden lands and mystical creatures aside), this is about characters very much belonging in the spaces they inhabit.

And there will be backlash to any attempt at diversifying the roster. I don’t speak Mandarin (I’m not Chinese) but I was so appreciative that a lot of the scenes between Mandarin speakers were kept that way and subtitled. That maintains a level of authenticity to the production and prevents you from thinking “oh made in Hollywood” and instead keeps you in the movie. Having audience being able to hear and see that when they wouldn’t normally seek out such films is a great way to expose people to another culture or even other faces.

Shang-Chi and the Legend of the Ten Rings is a thrilling movie with a relatable heart. It blends highly-intricate action with a story about family and the expectations we try hard to either live up to or run away from.

Not only is this an instant 4K blu-ray purchase for me but I’ve already bought the toys. I cannot wait to see where some of these characters go next in the Marvel Cinematic Universe.