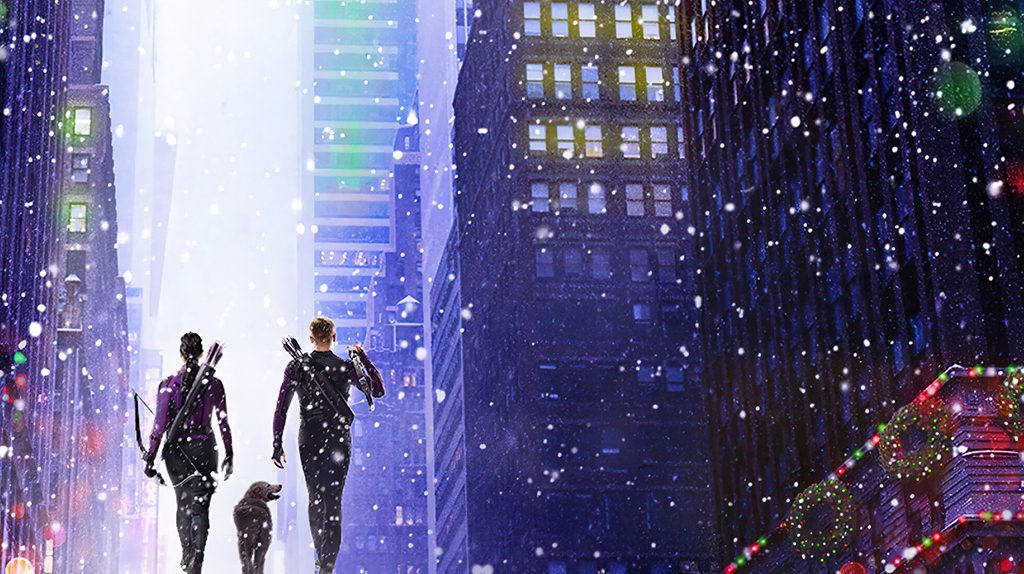 Marvel Studios continues to add variety to their behemoth we all know as the Marvel Cinematic Universe with the latest Disney+ show that, so far, plays out like a young adult mystery series.

One of the great things about these Disney+ shows, which I think I’ve highlighted before, is that they get to focus on the smaller elements of the MCU by by way of following the more underutilised characters from the big screen adventures. In comic book terms: the movies are the event stories and crossovers while the Disney+ shows are the one-shots or the micro-series. It’s often in those stories where readers pick up some of the more nuanced aspects of the characters and adventures they love, which often may not make it to the big tent-pole films due to lack of importance to the plot or running time.

Hawkeye is an opportunity to flesh out Jeremy Renner’s marksman but also to exhibit how “The Avengers” has impacted the world and maybe, in return, impacted someone like Clint Barton himself. It’s also our introduction to Kate Bishop (Hailee Steinfeld) , a character from the Marvel comics and who is the successor the the moniker of “Hawkeye.” We get to see how a world with superheroes has affected her and, in particular, how witnessing the heroics of Hawkeye first hand when she was little has impacted her and influenced her path.

It premiered the first two episodes at once and so far it’s a fun introduction as well as a fascinating reminder of the current status-quo of the MCU, which we first got a look at in Falcon and The Winter Soldier with the world moving on and of course, like Sam Wilson, people recognise Barton, although it’s interesting to see how similar those interactions are as much as how dissimilar they are. Normally, we see Clint as the highly-skilled “the normal guy” amongst the team of gods, super soldiers, and geniuses, and in this series we get a look at how all the attention and baggage can weight down such a person. We even get a slight glimpse at how the death of his best friend Natasha Romanoff (aka The Black Widow) has affected him too.

Another human aspect of the character that got people excited on Twitter what when people noticed Renner wearing a hearing aid in publicity shots, a callback to the comics. Too many people just assumed that something was going to cause him to be deaf in the show itself but (and I’m going to ruin it for you here) no, it’s a result of all the explosions he’s been around, like the destruction of the Avengers compound, that has affected his hearing over the years. Combine that and his deft knowledge at dressing wounds and it’s a great reminder that he is “just a guy” albeit highly skilled and good at his job.

He’s also the only one of the original Avengers who has been a parent the longest (I almost said the only one but then I remembered Tony and Pepper had a kid). Ever since Age of Ultron we’ve seen Clint’s paternal side that not only involves his own children but the way he instinctively turns father figure/mentor to the likes of Wanda Maximoff and that continues here with Kate.

Kate Bishop’s introduction is actually quite endearing too and they’ve done well to not make it too on-the-nose (although your mileage may vary). To a certain extent, for me at least, it’s a convincing explanation as to how this young woman can be so highly-skilled enough to even team up, let alone potentially/eventually, take on the mantle of “Hawkeye.” She’s from a well-off family (mother owns a large security firm, which also helps in the second episode), is inspired by Hawkeye’s heroics at the “battle of New York” and of course her family is able to afford all the lessons and training she undergoes to be this skilled. She’s basically if Bruce Wayne if he only lost one parent. She also rocks a tuxedo too so that was cool.

The is where the “young adult” aspect comes into it for me because so far it’s just as much her show as it is Barton’s. She’s precocious, a little bit sassy, a little too eager to be a hero, and also the right amount of naïve and enthusiastic when meeting her idol for the first time. She’s also dealing with a mother who has a new partner, and here, because superhero story, it’s exaggerated in away that many young people may relate to regarding their single parent moving on. It’s not all teen angst though, there’s a levity and humour that I appreciate too, which helps to balance out the more dour and emotional aspects.

There “mystery” component comes in when there is a murder that may be tied in with what’s going and what Bishop witnessed the night she encounters Hawkeye, which is going to be the main thread of this 6-part series. I’m too old to know all the YA stuff on at the moment but this is where I get my Veronica Mars comparison from for a lack of a better example (sure, I could make a more direct comparison to the CW superhero shows, but so far it feels somewhat distinct from those based on DC comics). Marvel Studios’ output has always been about broad appeal and while teenagers may not be the specific target per se, that’s the tone this show inhabits so far. Again, that’s the genre variety that Marvel Studios loves to adopt over its many stories.

Throw in some amusingly-themed gangsters, some LARP-ing and you’ve got an entertaining start to a lower-tier, street-level, superhero/vigilante, whodunnit adventure. And I’m in.

Although episode 1 ends on an appropriate cliff-hanger of sorts, I think it was a good decision to include episode 2 in the premiere as well. It’s not so much that there wasn’t enough in that first episode but the two episodes feel like a better introduction together.

Hawkeye is now streaming on Disney+ with a new episode every Wednesday evening.