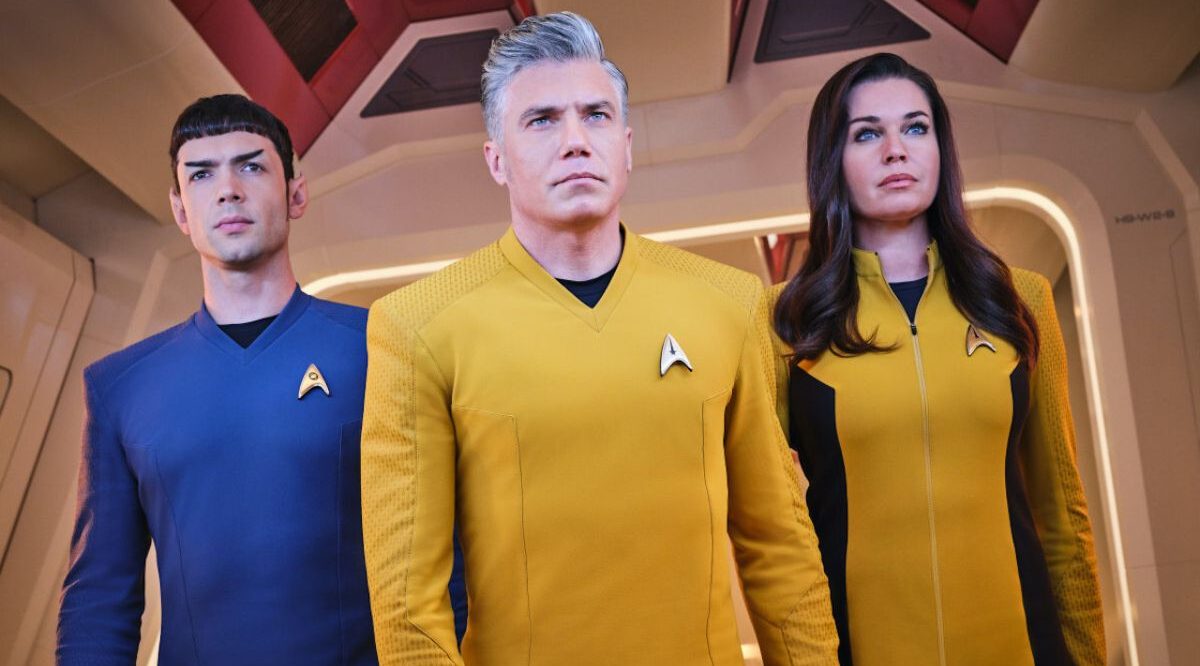 Promising to be a return to “traditional Star Trek,” Star Trek: Strange New Worlds has kicked off with a solid and enjoyable premiere episode that not only returns to its roots but makes sure to improve upon everything we think we love about the final frontier.

I’m a defender of modern Star Trek, or Nu-Trek as I sometimes refer to it, and I’ve enjoyed most of the current crop of shows despite all their flaws and some of the more recent wavering quality (I’ll get to that in another review). As much as I thought Discovery’s first season was the kick in the bum the franchise needed, I was very much looking forward to a show that followed a more familiar format.

Not that I ever minded the more intense, serialised story-telling that is popular for television these days but if you’ve got multiple shows running at the same time then why not change up the format and allow for different ways of telling their respective stories (Discovery was original pitched and picked up as an anthology series). Also, Discovery was beginning to repeat itself with its style of mystery box/galactic threat story telling.

Strange New Worlds promised an episodic format following the previously unseen adventures of the USS Enterprise under the command of Captain Pike (Anson Mount reprising his role from Discovery and possibly powering this whole show on his charisma alone) along with Spock and Number One (Ethan Peck and Rebecca Romijn, respectively, also returning and doing a great job). And in the premiere episode, they’ve delivered what they promised in a most enjoyable way.

We begin with Pike on sabbatical dealing with the weight of the visions of his “death” while in command of the Discovery and whether or not he wants to go back out to space. He’s called back to duty earlier than planned when his first officer goes missing.

As an introduction (or perhaps RE-introduction if you will) it’s a solid beginning that conveys an important, if broad, political message all while updating us on the status quo of the show as well as introducing us to most of the main cast. But more importantly, it’s a fun episode that has a good balance of drama and humour.

While it’s refreshing to see a straightforward, self-contained adventure that resolves in one episode, I also appreciated the connections and threads it has to the other Trek shows (Star Trek had been doing the connected franchise thing successfully long before the MCU). It indicates that it’s not going to abandon other aspects of the universe and helps to make it feel more “lived in.”

We’re introduced to the majority of the main cast and so far they are all delightful and full of potential. The aforementioned humour comes across well because these characters are so likeable in what we’ve seen of them so far. While some of them are new characters such as Security Chief Lt. La’an Noonien-Singh (Christina Chong )and Helmsperson Lt. Erica Ortega (Melissa Naiva), the others are familiar minor and major characters from the original series (my favourite gag from another reviewer is that his favourite “retcon” is that Nurse Chapel now has a personality).

Lt. Singh and Nurse Christine Chapel (played by Aussie actor Jess Bush) are probably my standouts for this episode because they exhibit such potential and fun respectively. I also really like seeing a young and more green Cadet Uhura (Celia Rose Gooding), and I’m curious to see if Doctor M’Benga (Babs Olusanmokun) can unseat McCoy as my favourite “down to earth” character. We only got a glimpse of Chief Engineer Hemmer in a montage at the end of the episode but I’m fascinated to see this blind character being played by Bruce Horak, an actual legally blind actor. They’ve got a fantastic mix of characters and actors here and I’m all for it.

It’s also a really good looking show too. It’s not going the moody route but does feel much brighter (to be fair Picard was also visually bright in parts). The ship is a gorgeous modern update and the sets are fantastic. Much better and possibly more detailed than the Kelvin timeline designs. Things have the right balance of retro but also fit in contemporary television. I really liked the Enterprise uniforms that were introduced in season 2 of Discovery as they looked like a great interpretation of the original series designs but I think I’m liking these new renditions even more in balancing the TOS designs with contemporary sensibilities (something the JJ Abrams films messed up – Beyond got it right though but that wasn’t one of his).

For a show that’s “looking back” it’s got the right level of fan service so far. We’re in an era of “recognise this?” is overtaking genuine writing and story telling because those who do it well do it too well that others who ape it don’t understand why it works.

I think my only concern at the moment is how strict will it be in sticking to episodic stories? If a story requires more than one episode to tell it will they do so? If not then do they compromise the quality of that story or abandon it altogether. It’s a silly question, I guess, I just hope the show doesn’t restrict itself so much to the detriment of its stories. Just tell good, entertaining stories is all I ask.

With five different Star Trek shows concurrently running, there is plenty of room to tell great stories and have fun adventures in multiple formats. It’s a smorgasbord of the final frontier with enough for everyone to pick a favourite that matches their tastes. Star Trek: Strange New Worlds may be the longest gap between pilot to pick-up (technically 55 years), it still has a lot to live up to and it’s already showing signs of promise.