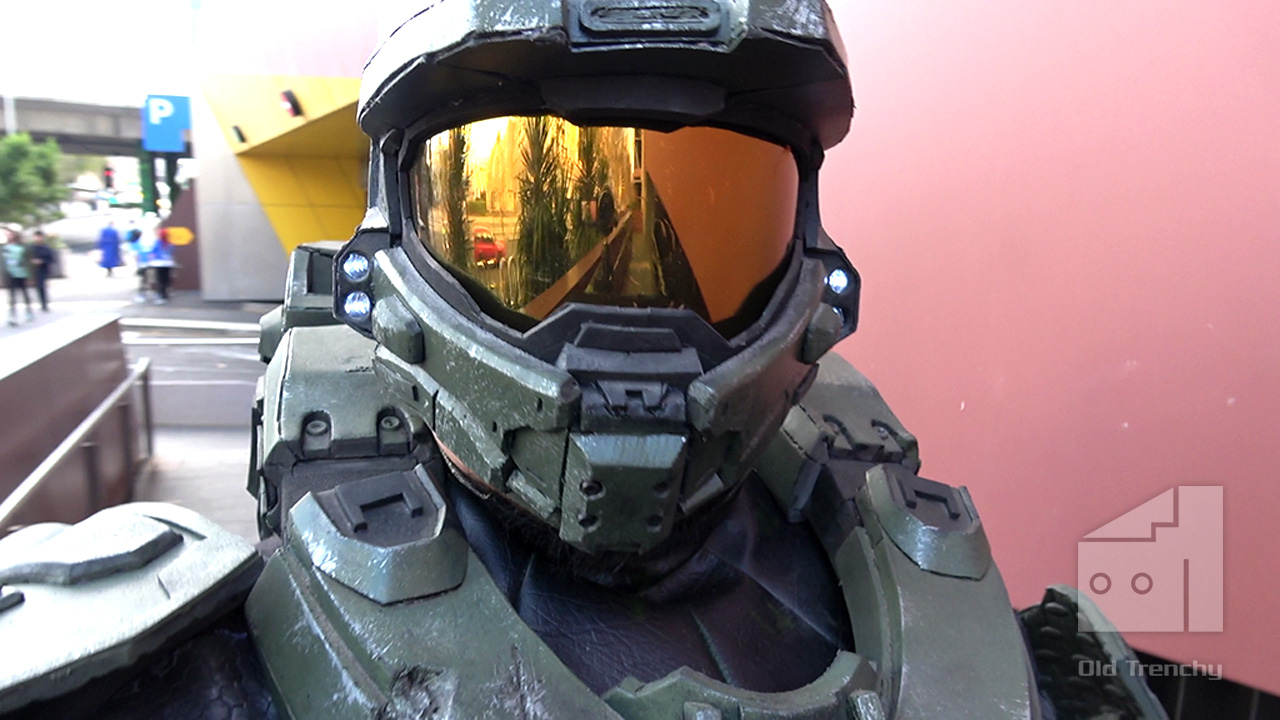 Last year I posted this short clip to my public Facebook page post AVCon as a thank you to all those who made the weekend as enjoyable as they could.

I thought it was a pretty cool and impromptu little sequence and I added it to the end of my AVCon 2019 Cosplay Music Video as a nice little coda.

What I haven’t told anyone until now is that underneath that helmet, behind the “calm and measured” saunter into the Convention Centre carpark… I’m having a panic attack.

It was some time after midday on the Saturday and I had been wearing Master Chief since about 10am. Chief is like a second skin to me and I’ve never had issues wearing that cosplay before but in the final hour I was warmer than usual and more lethargic than I’ve ever been in that suit. It became harder to breathe and I was losing some sense of where I was.

I headed back to my car to change into normal clothes but I didn’t remember any of that sequence until I watched back the video. That sort of “blanking” has happened before.

In the previous 12 months I had maybe one or two small anxiety-driven moments but it had been years since I experienced anything full-blown.

And forgive me if I’m mixing up my terms here. I believe “panic attacks” and “anxiety” aren’t always the exact same thing, I’m simply using the terms that fit my experience.

If memory serves, I experienced my first major panic attack at the tail end of 2011. Before that I had never experienced anything so intense or so paralysing before. It could almost be considered a nervous breakdown too (but again I’m throwing about terms). It came about from a long and drawn-out dramatic period: A breakdown in a valued friendship and the introduction of a toxic individual meant the following 12 or so months were the most excruciating and traumatic of my life.

During that period, my anxiety had developed in such a way that it was a near-weekly, sometimes near-daily struggle to function. Anxiety was not something I had to deal with before that. And I didn’t seek out professional help. That’s something I regret now. I’m assuming it most likely would have made the bouts of depression and feelings of being unsafe out in public a lot easier to handle.

Yeah I felt unsafe for a while there. This toxic individual that had been at the centre of it all was somewhat unstable by some accounts. He was also into cosplay and occasionally in the lead up to certain events I felt as though my physical safety was at risk.

I did develop my own coping mechanisms, I had outlets and distractions, as well as a few good friends I could rely on. The type of people that would pick up a baseball bat and start swinging at anyone that even looked at me funny kind of back up (think what you want of that it certainly helped). And over time (think years) things did get better.

But before things got better it got… bad. Not ready to say how bad though.

Things were very low for quite a while for me. I had to try and get myself out of the long depressive episodes by refocusing my energy into my hobbies. My 2012 debut of the Iron Man suit may have been shite but it saved me from drowning.

And the panic attacks would be triggered by the smallest of things, often by mutuals that were determined to ignore my pleas about the person involved (many of whom would eventually find things out for themselves but not before more people came to harm). The attacks would happen anywhere, most of the time when I was on my own drowning in my own thoughts.

But sometimes they would set off when I would be surrounded by people (at a group dinner for example) and none of them would notice what was going on with me. It wasn’t their fault. For me, panic attacks and similar anxiety issues rarely ever manifested itself as something outwardly obvious. You would have to pay really close attention to me but even then if you did notice something I would most likely lie and tell you I was fine.

Over time the attacks started to happen with less frequency as well as less severity. There was a brief and minor relapse but bandaging a friend’s wrists late one night having not heard from them for years will do that.

I don’t recall ever having anything that resembled an attack in 2019 (I may have had only a couple of minor moments in the previous year also, which is a testament to how well things improved), except for that moment depicted in the video. As you can see, there is nothing in that video that alludes to anything out of the ordinary (within reason of course, I’m dressed as Master Chief).

I don’t even remember why I decided to record it. It would have required me to take the camera out of my carry case and set it up for selfie mode. In hindsight I am glad I did record it as it’s not only a reminder but an illustration of sorts that such moments and issues are not always obvious on the surface. It’s kind of artistic in that sort of way.

It’s also somewhat meta (or maybe ironic I guess) in that I’ve always seen my head-to-toe cosplays as a sort of safe cocoon. Fake as the armour may be, I’ve always felt protected in a mental and emotional sense.

The panic attack was not the reason I didn’t enjoy that year’s AVCon. I still maintain it was the least enjoyable of the last ten years. The terrible lead-up as well as the crappy events of the morning were what triggered my first attack in a very long time.

And it really did catch me off guard. I was understandably complacent about my current state of mental health, I was pleased that things had “gotten better”, so I was not prepared for the craptitude that awaited me.

I recovered fine once I got out of my cosplay armour. Had a rest, a bite to eat, and went about my business the rest of the Saturday. I was in a more casual cosplay for the following day and didn’t experience any attacks.

I’ve talked about my mental health before but I’m only revealing this particular incident now because I want people to be aware of such issues. My recovery was a lengthy one, which I could excuse as being “right for me” but with 20/20 hindsight (see what I did there?) I really should have sought help. I can’t guarantee that sort of help would make recovery quicker, easier, or if it could’ve helped avoid relapses because none of these things can be certain. I just know that I was fortunate that I didn’t have to suffer through it alone. Not every one is that lucky.

Thank you to all those people who have helped me along the way. Whether you’ve come and gone or still in my life I appreciate the impact you’ve had.

There is a lot going on in the world right now and that can add to the anxiety of whatever else is happening in one’s personal life. Mental health is an issue that can affect so many people and we hear and read a lot about it especially within what are often considered “niche communities.”

I’m not good at this so all I will add here to wrap things up is for whoever this may concern… you are not alone in this. Nor do you have to experience these things by yourself. And it’s tough to reach out, it’s tough to ask for help (I certainly know that first hand). But I will recommend to those that are in need to check out organisations such as Beyond Blue for information and assistance.

Also, just keep an eye on one another. That’s the simplest things we can do.

If you enjoyed this word spew the please consider supporting the work I create by heading over to my Ko-Fi account and dropping a few dollars into my tip jar.