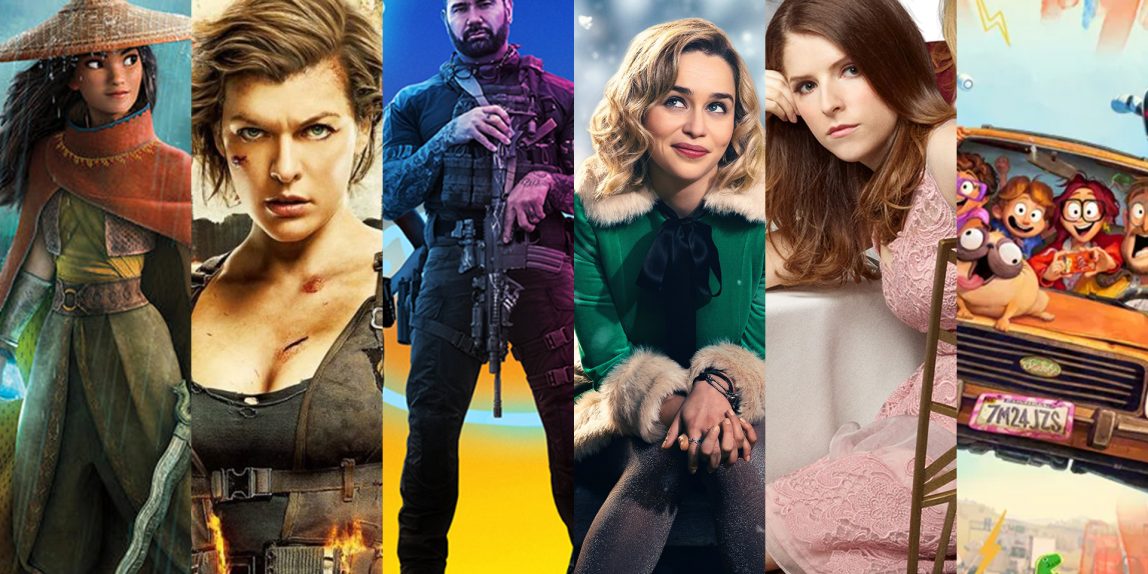 Raya and the Last Dragon (2021)
I regret not watching this earlier and paying the Premium Access because this movie is a wonderfully fun and gorgeous experience. It was fantastic to see the South-East Asian inspiration all throughout, with such great performances and characters all in service of a very sweet story.

I loved almost everything about this film as well as its message of trust. The animation and art style is beautiful, the story very touching, the action absolutely thrilling, and it’s been a while where I’ve laughed out loud at actual jokes in a film. My only nit-picks would be how this film goes at quite the clip trying to compress an entire adventure along with a bit of history and lore all in just under 2 hours. Also, this is clearly a film aimed at younger audiences. There’s minimal nuance or any major surprises or twists but that’s barely an issue just a heads up.

Raya and the Last Dragon is another one of these films that suffered because of the pandemic and the lack of theatres being open/people going to the few theatres that were open. I also want to quickly address a couple of shitty takes in regards to this movie though… the critics making comparisons to Avatar: The Last Airbender may seem innocuous but having now seen the film it’s just lazy observations. Much more problematic though were the folks trying to dissuade others from paying the Premium Fee on Disney+ in an effort to tank the idea. Unfortunately, the idea was fueled by racists that were angry at an Asian-themed movie with an Asian voice cast.

I regret waiting for as long as I did but I highly recommend this movie.

Resident Evil: The Final Chapter (2016)
I’m still relatively new to the Resident Evil series of GAMES thanks to the recent remakes but I’ve been dipping the toe in for years via the various live-action and animated movies. Even from the very first film I was aware that these had only tangential connections and references to the source material.

These films are perpetually stupid and despite my always giving them a go I am continually flummoxed as to their longevity. Mind you, I am also continually reminded that Milla Jovovitch is a legit top-tier engaging action-heroine so that may have answered my own question and plays a major part in the appeal .

Still, like the other films in this series it’s really just a bunch of cool sequences and moments strung together by a paper-thin plot, even the plot twists and “character moments” are trite and done better elsewhere. Cool ideas sometimes executed well isn’t really enough to hold one’s attention.

Army of the Dead (2021)
From one zombie flick to a better one, Army of the Dead feels like a Gears of War script that’s been through a game of telephone a dozen times. This is probably the closest we’ll get to seeing Marcus Fenix on the big screen.

This is actually a lot of fun albeit a tiny bit disposable. It looks great, the action is thrilling, it’s well cast with great performances (the last-minute greenscreen replacement was near-seamless and Tig Notaro makes everything instantly better), and while the ideas put forth aren’t necessarily new to the genre the combination here does help to lightly refresh the long-stale Hollywood-based zombie movie.

Army of the Dead is a perfect example of what I’ve been saying for a while: Zack Snyder is a great filmmaker but a rather average storyteller.

That may sound odd and confusing but this movie is at its best when it dives headlong into its action set pieces and of course the montages with their not half obvious needle drops (pretty much all of Snyder’s hallmarks are here even if a tad reigned in). It trips over itself when it attempts anything too clever, satirical, emotional or character-based. I appreciate that it tries most of these things as it prevents the film from being a completely dumb. In any case it’s a fun distraction for an evening.

Last Christmas (2019)
In the wake of his breakout role in Crazy Rich Asians and her gig with Game of Thrones coming to an end, both Henry Golding and Emilia Clarke seemed like the perfect pairing for this kind of romantic comedy.

Last Christmas frustrates me because it should have been better than it was. In the broad strokes it’s a fairly stock-standard rom-com (which isn’t the problem), however, it feels like two different groups made the first and second parts. It begins in such a scrappy and somewhat incoherent manner, introducing all these characters and featuring some odd editing choices. The second half is more cohesive and you end up just starting to get a feel for the corny story.

Both Golding and Clarke are really great throughout and their chemistry is what drives it but anyone who thinks they figured out the gimmick/twist from the trailer is just counting down until the denouement, which I’ll admit I was doing… and yet how they reveal it was what got me over the line in enjoying this movie regardless of how incredibly on-the-nose it is. By the way, almost the entire soundtrack features songs by WHAM!

Co-written by Emma Thompson (who also stars in this) and directed by Paul Feig, I’m guessing the tonal clash between English and American sensibilities may have contributed to that odd first half but if you can survive that part I think this is an enjoyable enough way to spend an cosy afternoon.

Table 19 (2017)
Another rom-com and this time, honestly, I reckon my crush on Anna Kendrick is the only reason I watched this movie.

While I admire the premise, I’m not sure this one worked so well. There are some cute and amusing moments but overall there’s some mixed messages and the script seems to confuse “quirkiness” for humour. The moments that legitimately work make you wish this was a better film. I think the other major problem is that it’s trying to juggle too many characters. This normally wouldn’t be a problem but when each character requires an arc with a resolution then an already muddled script loses its focus.

Ultimately, this ends up being a tad dull but those few earned moments make you wish for something more memorable.

The Mitchells vs The Machines (2021)
I am now officially too old having reached my limit of overusing contemporary and popular culture references.

Possibly because I went into this one a little too hard wanting to like it, this just didn’t click with me, which makes me the outlier apparently because it’s been getting such great reviews. Unfortunately (and I hate to say this), I found The Mitchells vs The Machines to be incredibly obnoxious.

I can identify all the ingredients I liked and appreciated, however, the mix wasn’t right. Produced my Lord and Miller, there seemed to be an attempt at recreating the style and tone of both The Lego Movie and Into the Spider-verse but someone left the pot on the stove for far too long.

Moving away from the cooking analogy and at the risk of sounding like oldmanyellsatcloud.jpg its overreliance on references is very much a detriment to this movie. Everything has its limits but it leans far too much into meme humour as well as the Snapchat aesthetic that it obstructs what was aiming to be a heartfelt story about family. The high energy is relentless but I wouldn’t have minded that so much had I the breathing room to give a damn about anything. I’ll give the movie credit for a fun third act that legitimately gave me one proper lough out loud moment but by that point it had already used up most of its references and starting to repeat itself.

It pains me to be contrarian but this wasn’t my cup of tea. Maybe I am just old now.