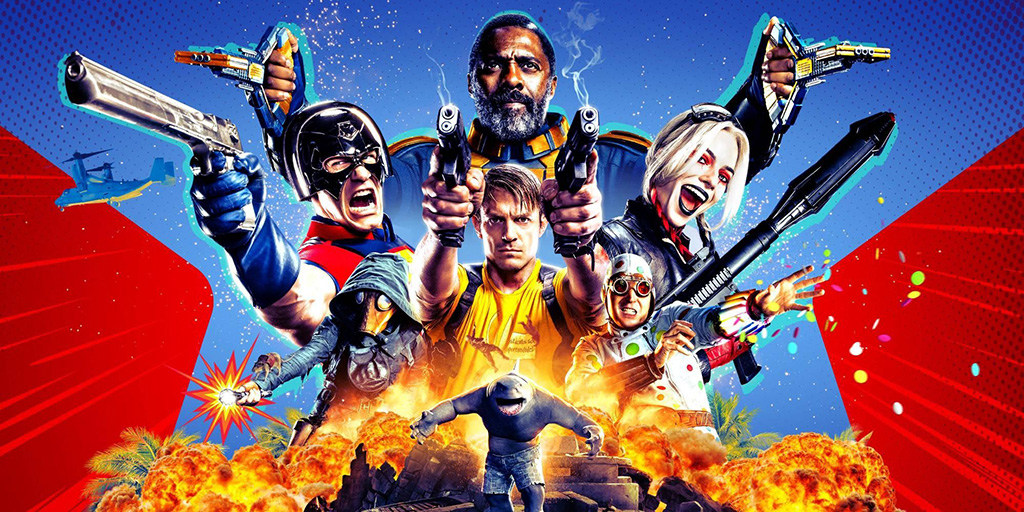 A fun and exciting film with incredible action and a surprising amount of heart, The Suicide Squad is quite possibly THE BEST movie ever to come out of the DCEU.

The recent restrictions and (ongoing in some places) lockdowns made it difficult to get back to the cinema (harder still to want to go back to the cinema) but I finally got around to seeing The Suicide Squad and it is quite honestly one of the best times I’ve had the movies. And my introduction is not hyperbole when I state that this is THE BEST film to come out of the DCEU ever!

It has the rousing action of Wonder Woman, the batshit crazy spectacle of Aquaman, and it also remembers the characters are the emotional core of any compelling story like Shazam!. It’s what a comic book movie of this type needs and of course it came from writer/director James Gunn (the Guardians of the Galaxy movies all have these qualities in spades).

Amanda Waller (Viola Davis) is still running her black-ops outfit, Task Force X, using highly-skilled (and some not so) inmates for extremely dangerous missions on behalf of the US government with the promise of commuting their sentences. Waller recruits Bloodsport (Idris Elba) to lead a mission to an island off South America to destroy “Project: Starfish” before the anti-American dictator of the island nation can use it against the US.

Apart from a few returning characters and the implication that this is a regular routine, there is almost nothing connecting this new film to the atrocious 2016 movie, further exemplified by the addition of “the” in the title of this one instead of the usual sequel signifiers. Also the basic plot hits a tad differently in the current climate where the US involve themselves in tiny nations via military force but that has pretty much been a criticism of the US even before I was born. That’s gonna be lost on the type of crowd that keep cheering for R-ratings in their young people’s media but it is what it is.

It shouldn’t be a surprise but it’s still amazing to see how straightforward it is to make a good movie when the filmmakers are not just capable (and a good fit with the material) but allowed to tell a good story. James Gunn has this innate ability to lean into the ridiculousness of the source material, getting the right tone and balance, and make it convincing and compelling. Much of that is through how fleshed out the characters are.

Regardless of the varying quality of the films, the DCEU has been rather solid when it comes to casting, which continues here. Idris Elba’s Bloodsport is clearly a replacement and stand-in for Will Smith’s Deadshot (even down the “motivation” for him to participate) and yet his performance adds gravitas to the reluctant leader of the Squad. Margot Robbie continues to be the MVP of the DC films by giving yet another layered performance as Harley Quinn that quite clearly progresses her character forward from previous movies. Despite a slightly larger monosyllabic vocabulary, King Shark (Sylvester Stallone) is apparently the “Groot” of this outfit and displays a surprising range of emotion. And John Cena is clearly having way too much fun as the embodiment of “American exceptionalism” The Peacemaker (Cena wearing the costume on the press junkets just because he likes it definitely hides how unhinged the character is).

The many other Squad members also show up and give great performances too with what little screen time they have, some even more so than their previous outing, and their interactions are fun to watch.

However, while all the main cast have their heavy emotional beats (even King Shark) there are two standouts whose characters almost mirror one another and really provide the heart of this movie: Ratcatcher 2 (Daniela Melchior) has a tragic origin for her special abilities but still doesn’t let that prevent her reaching out and connecting to those around her. Polka Dot Man (David Dastmalchian) has a similar familial backstory, which he too has to work through. His is much more ludicrous than Ratcatcher’s in line with how ridiculous the character is and yet it works. They both work and provide the most complete character arcs in this movie.

Hyper-violent and full of humour and kinetic energy, the action is absolutely wild. Some sequences even help to illustrate the characters better too (the “contest” between Bloodsport and Peacemaker for example). And the humour matches the absurdity of the source material without being condescending, no matter how many times they “hang a lantern” on it. Like I said, Gunn’s ability to lean into the more ridiculous aspects of this to convince you to go along with it, let alone care about what’s going on, is like a seamless magic trick. There’s even a moment of exposition in the third act that feels appropriately Doctor Who in its depiction that turns somewhat silly imagery into something rather terrifying (Peter Capaldi’s Thinker is basically him playing his version of The Master and I thought that was cool).

This movie really does focus on being the best version of itself that it can be. Despite two mid and post credits scenes, it doesn’t spend time setting up nor arduously connecting to other parts of the DCEU. It also “fixes” and addresses some of the more egregious mistakes of its predecessor and the questions raised by it such as the controls of the explosives implanted into their brains, why would one send a complete team of military personal if you’re just wanting to sacrifice these prisoners anyway, and what type of people are going along with Waller’s cruelty are just a few examples.

I think my only nitpicks are to do with stylistic story telling devices. The “3 days earlier” time jump used in the first act works in order to help the audience get right into the action without too much dull set up as well as delineate the different groups of characters. But I’m not sure it fully works in the third act climax where the energy really needs to build up uninterrupted. Similarly, and as much as I love anything post-Joker Harley Quinn, the middle of the movie slows down to focus on Harley. Now these aren’t deal breakers and are more likely to do with my personal taste but at the same time they stuck out for me.

The Suicide Squad is the perfect example of good story telling that not only understands the absurdity of the source material but doesn’t try to hide it. Instead it makes you care first and foremost about the characters more so than the “coolnesss” of what’s going on. A fantastic and fun time that even makes you forget it’s rated R. Definite steelbook blu-ray buy for me.