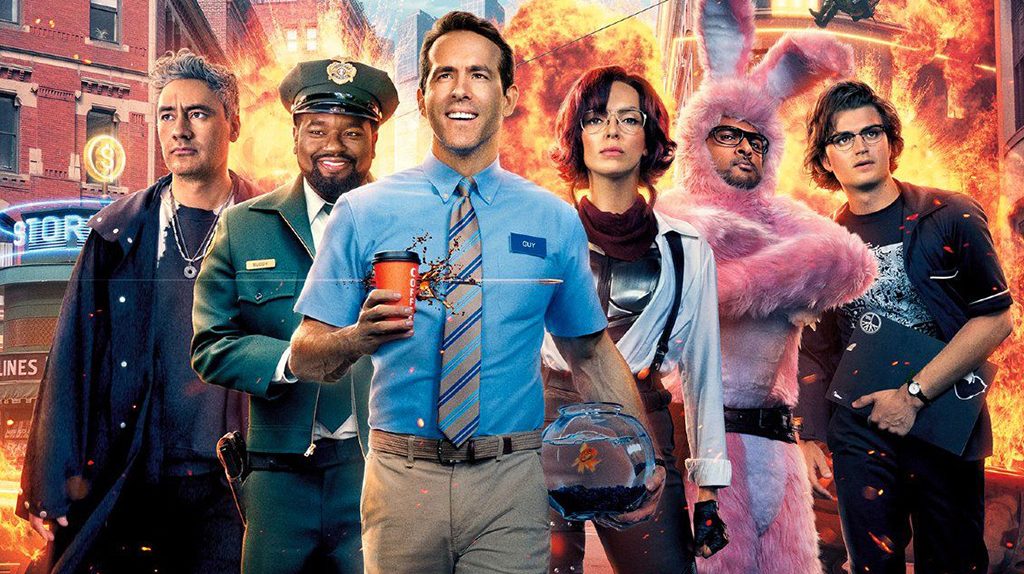 I don’t think I’ve ever used the term “feel good movie of the year” but that’s exactly what Free Guy is. Hilarious fun and corny as all hell, this surprisingly sweet story will leave you feeling joyous by the time the credits roll and is likely to remain a classic for years to come.

Guy (Ryan Reynolds) works as a teller at the bank in Free City. After bumping into “Molotovgirl” AKA Millie (Jodie Comer), he finds out there’s more to the world than he thought, eventually discovering he’s a non-playable character (NPC) in a popular battle-royale style video game. He proceeds to impress his “dream girl” by “levelling up”, catching the attention and ire of game developer, Antwan (Taika Waititi) as well as the real world.

Free Guy had a couple of obstacles on its path to release including obviously the pandemic delaying it for a year as well as Disney’s acquisition all of Fox’s film and TV assets almost scuttled any productions around that time but neither of these things would be enough to stop a movie that has so much going for it.

With games like Fortnite and Overwatch being massively popular these last few years, someone was bound to tap into that zeitgeist and make a film around it. And it could easily have gone wrong too. Video game movies aren’t always that great, films BASED ON video games rarely translate well and movies ABOUT video games do even worse (with maybe a couple of rare exceptions). So to have Free Guy be as good as it is may appear to be luck but that ignores what the movie is actually about.

That’s because it’s not about the video game itself, its simply the premise and aesthetic while the obvious focus is on the characters like any great story should be. Once you care about what happens to them you become wholly invested no matter how ridiculous or foreign the premise may be to audiences. And the performances are all great and pitched exactly where they need to be for this.

It feels disingenuous to say that it’s Ryan Reynolds being Ryan Reynolds here but it’s certainly a different flavour of him in making Guy bright-eyed and naïve and of course that works so well and probably informs the many other NPC performances throughout the rest of the film too. As another critic highlighted, Jodie Comer definitely brings a Kate Beckinsale vibe to “Molotovgirl”, which is seemingly in contrast to real-world Millie but not by much when you really think about it, which is some interesting nuance. And it’s somewhat refreshing to get a different type of tech billionaire CEO in Antwan. Waititi is hilarious and no doubt ad-libbed way more that hasn’t made it into the movie, yet he also makes you want to hate Antwan like you should any villain.

It’s already been spoiled on Reynolds’ social media but the cameos are worth keeping an eye out for. Not the actual real Twitch streamers, mind you, they were probably the only black mark for me in this film (can we just ignore Ninja please?).

There may be temptation by “gamers” to look down their nose at the video game aspects and decry it but honestly I think the streamlining of such helps in allowing audiences who aren’t familiar with battle-royale games or even the industry itself to know and understand enough and it helps with the flow of the story while still establishing the rules. It does feel like somewhat of a love letter to video games anyway.

The story is hilarious from start to finish without being exhausting and I don’t think there’s anything overly obscure in that humour either so it’s really quite accessible. The few references it does make are well known enough by most of the world already and they do provide big reactions for the audience adding to that feel-good nature of the movie.

Some may consider the story “predictable” but I rather think of it as “straightforward” because I don’t see that as a detriment to the film whatsoever. It doesn’t wastes any part of itself either, every set up and plot point pays off without being too tricky but still manages to be clever. It’s corny as all hell but the film earns such good will you can often overlook these sorts of cynicisms. It’s just THAT lovely and satisfying of a time.

It feels like it’s been a while since I’ve thoroughly enjoyed a film of this wholesome nature. Free Guy really is such a joyous and memorable couple of hours of corny and satisfying fun that will most likely remain one of those comedy classics a decade from now.

And yes, that Mariah Carey song will be stuck in your head for the next few days.