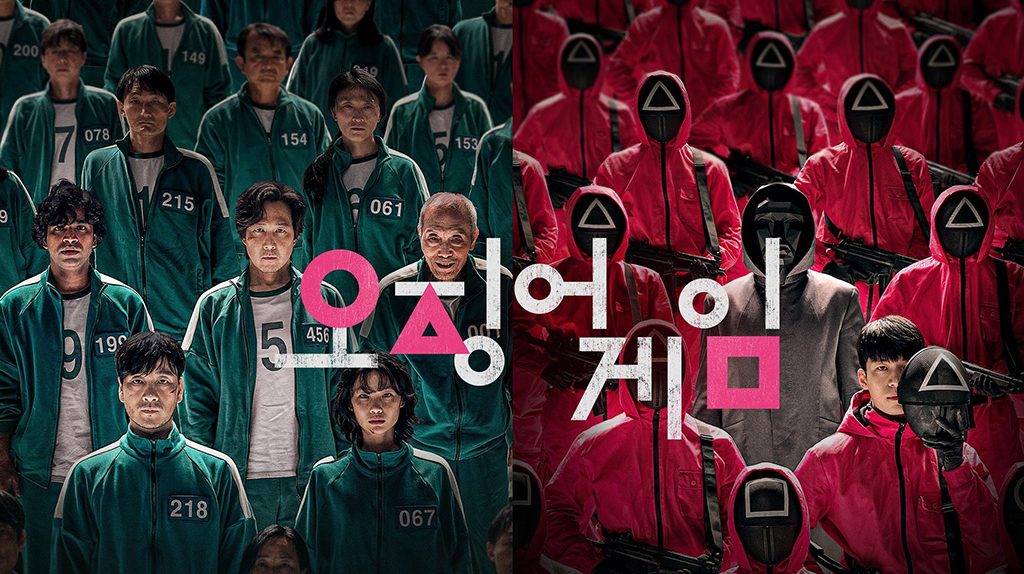 While Squid Game tries to surprise with every twist and turn of the plot, how it gets there via these characters and all the graphic violence juxtaposed with delightfully simple children’s games is the most compelling part of this streaming phenomenon from South Korea.

I thought I was late to the party when I finally decided to sit down and watch Squid Game on Netflix. It felt as though people had been raving about the series for months when in reality it had only been two weeks (and in that time the South Korean series rocketed to become the most watched show on the platform ever). I relented to the hype and was pleasantly surprised at how hooked into this I became.

It took me an extra week and a half to want to finally finish this review though.

Squid Game, named after a game played by children, sees a shadowy organisation that rounds up hundreds of people desperate and drowning in debt and give them a chance to compete for billions of Korean won in a series of children’s games with deadly consequences.

Although there is an ensemble cast, the show primarily focuses on Seong Gi-hun (Lee Jung-jae), aka Player 456, a dead-beat dad, crappy son, and gambling addict who steals from his elderly mother to bet on horse races and owes money to loan sharks who carry around wavers to sign away organs of those who can’t pay.

And most of the characters vary from bad people who do bad things to people who are forced to do desperate things for money such as a gangster, a pickpocket (who coincidentally stole from Gi-hun), an Pakistani immigrant (who may be too broad of a caricature because Asian cinema is a bit like that sadly but he’s actually a rather sweet character), and Gi-hun’s successful childhood mate who is wanted for embezzlement. The only one involved in these games who doesn’t appear to be in financial strife is elderly Player 001 (Oh Yeong-su) who has a brain tumour and only agreed to the games as he has nothing else to live for.

There is also a police officer (Hwang Jun-ho) who stumbles upon the games in search of his missing brother.

Apart from the main ensemble, the behind the scenes goings on with the game, and the cop searching for his brother, there’s also a plot thread about a “side hustle” that only a few people know about. With these threads all weaving about at once it’s pleasant to see it all working together and not overwhelm the viewer. It’s like the right amount of story going on to keep you interested and invested.

I would recommend watching in the original Korean with subtitles as that best conveys all the performances, which are a touch exaggerated in that way a lot of Asian cinema is presented. However, it really does work here because the entire premise is rather over-the-top. It very much suits how graphic some of the scenes can become or how ostentatious certain aspects appear to be.

Many have labelled this a commentary on capitalism, or more specifically, the dire financial situation many South Koreans are facing in the current economical climate (so much so even the North are twisting it to claim the show depicts how bad their southern neighbours have it). But I don’t really think its so much a “commentary” on such because it doesn’t really delve into the actual issues and causes. Instead it touches upon it and uses it as a familiar backdrop and allows the characters to be more relatable in their desperation.

And that’s Squid Game’s main strength in how much focus is on the characters and their motivations and reactions to the absurdity they face. The series tries hard to get you to sympathise with these characters especially Gi-hun who seemingly turns into a better person during the games rather than in the outside world. No matter how shit the person may be, there are moments you start rooting for certain characters or feel relief or even betrayal. That’s how effective these characterisations are.

Mind you, there is a hot take where you can claim this series is an allegory in how the super wealthy think they are “helping” the down trodden but again that’s not quite the point here.

It’s not accurate to say the twists are “predictable” (some are genuinely surprising) or go the other end and claim that every surprise is truly jaw dropping. Your mileage may vary depending on how you like to watch and analyse these things (and some of you are really insufferable know-it-alls). For me it was HOW they get to these reveals that were really compelling. For all the exaggerated performances, there was a lot of nuance and slight of hand that goes on, which makes you appreciate the effort that went into the story telling.

Without spoiling it, the ending(s) range from heart-breaking to being a little bit protracted. I don’t think anything was changed from the original intent but let’s say that if it were a Hollywood adaptation (which would be a bad idea but that’s for another time) then the ending could have been a lot more succinct and impactful.

What would you do? How far would you go? And who would you let die if it meant no longer worrying about money? There are many other examples of these themes but Squid Game has the benefit of being from a perspective that many around here are not used to, which is why giving international cinema a go is such a pleasure I encourage quite often. And this perspective is a bit of a fresh one despite the trite comparisons some have made to The Hunger Games.

Absurd, over-the-top, and graphic, juxtaposed with the child-like simplicity of the visuals and premise makes Squid Game compelling in its morbid reveals and desperate characters. Definitely check this one out before someone attempts to adapt it.