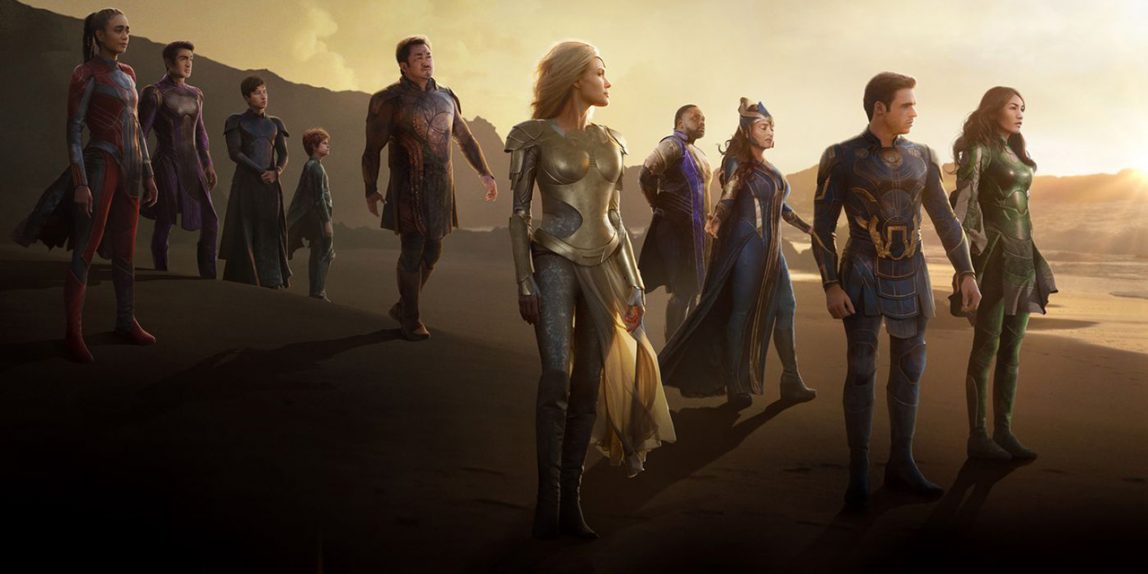 In spite of its scope and ambition, Eternals doesn’t quite hit it over the fence but the combination of arthouse sensibilities with the superhero spectacle is admirable in their contrasts and enjoyable enough in this refreshing shift from the often criticised MCU formula.

The Eternals are a group of warriors from a planet called Olympia who were sent to Earth 7,000 years ago by the Celestials to protect its people from creatures known as the Deviants. After succeeding in their mission, and under strict order not to interfere with the conflicts of the local inhabitants in fear of stalling their development, they remained living amongst the humans awaiting new orders to go home.

Having a very basic and passing knowledge of the original comics (mainly its reputation as doing “Ancient Aliens” but for comic books), it felt like Marvel Studios was finally “taking a risk” again with this title (it’s known as being – or at least become – more about explanations and filler for the more cosmic and “out there” aspects of the Marvel stories… like really out there). However, the Marvel Cinematic Universe is also known for being great at distilling its source material down to something more palatable for general audiences, sifting through what does and doesn’t work, tweaking and streamlining it for the big screen. And for the most part it works.

VERY MILD SPOILERS FROM HERE ON…

At just over 2 and a half hours, it’s a slow burn of a film and that allows the audience enough time to absorb each moment, each new bit of information (and there’s a lot of info), as well as being introduced to a large ensemble of brand new characters. And it’s those characters who are the strength of this movie because while the MCU has been great at character driven stories overall, Eternals really leans into that.

The main Eternals start out almost like near-blank slates, which appears a little stilted at first but then you realise that the characters do indeed change over their multi-millennia-long lifetimes and those characterisations end up being wonderfully diverse and distinct from one another. Their interactions not only allow for necessary info-dumps (another reason why it’s easy to follow this story) but it also helps in empathising and caring for these characters. How they interact also, the dynamics between certain Eternals, some of their pairings, often lead to amusing scenes, awesome actions sequences, and even lovely and touching moments.

Like Thor and Asgard, there’s a lot of appropriating of ancient mythologies as Jack Kirby had intended (names like Ikaris, Theena, Gilgamesh, and Olympia being the most obvious) but the diverse casting of all these roles has been one of the most fascinating and refreshing parts for me. And it simply just is and matter of fact, none of it is highlighted and you just deal with it. Although, I will highlight how seamlessly I found all of Makkari’s (Lauren Ridloff) subtitled dialogue as well as being easy to follow (some people may find it jarring to flip from spoken dialogue to reading subtitles).

Sersi (Gemma Chan – returning as a different character from who she played in Captain Marvel) is the emotional core of the group and it’s surprising how she carries the weight of the movie with (at first) a seemingly unassuming role. I originally feared that she was going to be another “love interest” but I really should have known better with this lot by now. While a few of the cast appear larger than life (Gilgamesh, played by Don Lee and Theena, played by Angelina Jolie) and reasons are given for how they remain under the radar in present day, the others being somewhat low-key yet convinces you they can live amongst the humans. Their frustrations (Sprite – Lia McHugh – forever looking like a teenager), their vanity (Kingo – Kumail Nanjiani – is a Bollywood star), or even their vices (Sersi is always checking her social media) all feel rather authentic and grounded in a movie where its basic premise is anything but.

Eternals is a movie of contrasts and much of that comes from director Chloe Zhao’s background in independent film resulting in more focus on characters, the deliberately slower pacing, as well as the look of the movie. Even with all the CG enhancements, there are still a lot of physically built sets and scenes shot on location that add to the beauty of this globe-trotting (and time-jumping) adventure and it is a beautiful looking movie.

Many of the MCU films dabble with genre and that helps keep things fresher than people realise (“The Winter Soldier” was a spy thriller, “Ant-Man” was a heist movie, etc). Eternals feels like a character study that one would associate with arthouse movies. It’s not so much about the “big bad” that threatens to destroy the world but more to do with how our protagonists deal with that as well as each other being the more vital focus. Being “arty” doesn’t mean it’s dour or too serious either, there’s just enough humour and levity in this to break things up.

Too many people confuse “formulaic” with “consistency” and for some reason attribute that to being a negative (why is it a bad thing that something is still good quality as well as entertaining?). However, this film is perhaps the furthest shift from the MCU formula that we’ve ever seen and that adds to the “risk taking.” And while I enjoyed the movie overall, not sticking to formula is perhaps why not every massive swing makes it over the fence.

In spite of the meditative pacing it does seem as though the movie just steps from one scene to the next with little transition or build up. Story twists (and there are some) are revealed with little to no fanfare to how dramatic they should be, solely relying on your investment of the characters. It ends up feeling like not a lot happens in this movie and yet there is so much going on (that pacing and tone can be really deceptive). While I don’t completely subscribe to the “show, don’t tell” adage that movie fans love to parrot without understanding it (there are info-dumps in the film that were appropriate as two people talking), the balance of what to show and what to tell was slightly off.

As I said earlier, it’s a film of contrasts, and so we have the massive cosmic stakes versus the surprisingly small scale final conflict climax (which is both incongruous and refreshing for a film like this if that makes sense). Back to my point about straying from formula, there’s no traditional central villain to root against until much later in the film and even then everything is a crapshoot on how invested the audience is in these characters.

These films usually do very well to connect and reference the other movies in the MCU and there are a few mentions here and there but the teases are where it really trips over its own feet. For all the subtlety this film achieves, one moment at the end was extremely clumsy and particularly obscure (also that ending is uncomfortably abrupt). The most overt teases are usually saved for the mid and post-credits scenes and there are TWO of them in this movie and both are kind of meh. I have zero issue with that casting, I just didn’t like how they were presented and how lacking both scenes were, almost as if they were an afterthought.

Also, if we’re doing “ancient aliens as gods” I’m not sure there was enough of that here despite all the flashbacks but then again that’s probably more down to my personal tastes.

Normally, I’m able to brush aside nitpicks and just emphasise how much I enjoyed the overall experience, which I did. In this case it’s obvious a few clumsy executions of otherwise decent ideas as well as not sticking to the formula as closely as before is going to throw off a few fans in their experience as it almost did mine. For my money, I found the ambition just as admirable as its overall end product.

There are those prone to hyperbole that will look at this movie as the crack in the Marvel Studios foundation that leads to its downfall but that’s very limited binary thinking. Not everything will work as well as a crowd-pleasing Avengers movie especially when when it takes (calculated) risks. I’ll put it this way: another reviewer said that Eternals was what the Justice League movie should have been based on the ingredients and characters you give a damn about and I completely see that.

Eternals is neither a misstep nor a gamechanger to the superhero genre (although it does have a big affect on the MCU going forward). It’s a pleasant and enjoyable diversion from what we’ve become accustomed to for the last decade of Marvel movies, it’s refreshingly different, with an intriguing story, and great compelling performances. I enjoyed what it achieved more than I disliked what it fumbled with and I can appreciate that. If anything, I’m curious to see how some of these characters incorporate themselves with the rest of the Marvel Cinematic Universe.