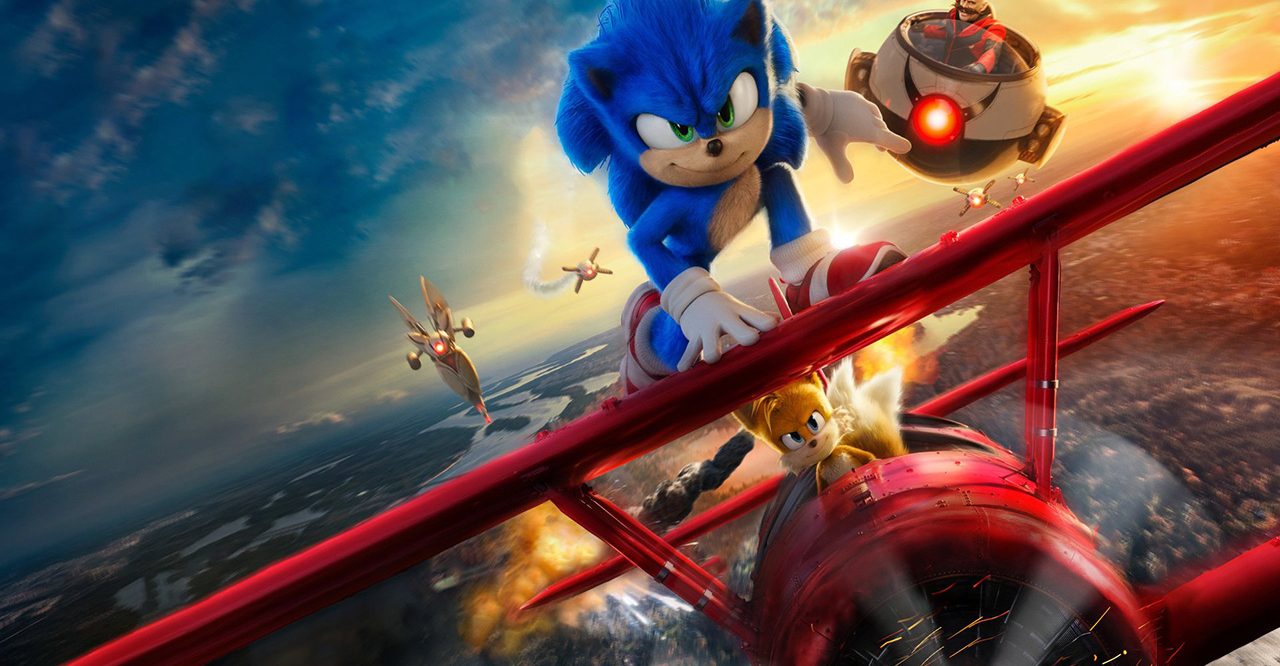 As sequels go this is another charming, family-friendly outing with Sonic the Hedgehog 2 that is, again, fun, funny, and heartfelt but also slightly more ambitious and willing to try out more familiar and “faithful” elements from the original games.

Getting accustomed to life on Earth, Sonic is now trying to use his powers to be a hero but is way over his head when Dr Robotnik returns with the help of Knuckles the Echidna. Now Sonic, with his own new sidekick, Tails, have to stop them before they get their hands on the powerful Master Emerald.

The story in Sonic the Hedgehog 2 is a fairly safe and straightforward one involving a search for a McGuffin and introducing new characters. Nothing really taxing about it as it attempts to inject themes about family and friends, which is a great carryover from the first movie. Although a few things feel a little forced or on-the-nose in that messaging, it’s mainly aimed at the kids in the audience and quite honestly I’m more than okay with that.

It’s important to be able to discern between films that appeal to a broad audience, aimed at a variety of demographics (think of most of Marvel Studios’ output) and movies made for younger audiences but with things thrown in for the older folks. The Sonic the Hedgehog films have both been the latter and I ended up having a great time with this sequel with heaps of laughs, fun action, and plenty of pops of nostalgia as a Sonic fan from way back.

Ben Schwartz returns as the voice of Sonic and continues the give the right level of energetic performance without becoming too irritating (I mean, your mileage may vary), as well as Jim Carrey as Robotnik, once again giving the familiar (if toned down) zaniness he was known for back in the 90s. As I said in my review for the first movie, these two characters are portrayed as polar opposites. In this instance, Robotnik uses those around him whereas Sonic learns to have friends or his own “squad”.

Speaking of which, Tails is absolutely adorable as the twin-tailed little fox who idolises his blue hero and the filmmakers were smart to avoid the usual stunt casting here and instead went with Colleen O’Shaughnessey, the voice of Tails from many previous incarnations. However, the one bit of stunt casting they did do is of course for Knuckles with Idris Elba voicing the punchy red echidna and I’ve got to say he works surprisingly well. Elba is basically giving his own version of Drax from Guardians of the Galaxy and it’s a great foil for Sonic.

At first most of the human characters feel somewhat perfunctory as they mostly stare at CG effects and while they are baggage from the first movie you eventually realise they do contribute to the story and explain a few aspects as well help to convey the earlier mentioned themes. James Marsden’s Tom “Donut Lord” Wachowski doesn’t get much to do this time but he does do big brother/father figure well and Tika Sumpter as Maddie is there for the maternal vibe and gets a few cool moments too. Mind you the comedic highlight is Natasha Rothwell as Rachell as she is a woman determined not to have we wedding ruined.

The first movie went with the reheated “animated character with human in live action setting” premise possibly as a way to save on the CG budget but it also worked out in being a mostly fun and charming adventure. The sequel is an obvious attempt to bring in more elements and references to the original SEGA games all while balancing the aforementioned baggage. Personal taste will determine whether they got that balance right but for me it worked.

From the Chaos Emeralds to the secret labyrinth, Robotnik’s robots looking more like Buzz Bots to Sonic’s inability to swim, there are elements that will pop any long time fan and are incorporated in a fun manner. I’ll admit, it does sometimes make you wish they did just do an outright full CG movie considering how much of the faithful non-human scenes work but this is still enjoyable too. Speaking of the CG, most of it looks really good too, the iconic three characters look perfect and a lot of stuff we remember in 16-bit has been nicely realised.

Oh and this film is genuinely funny. Between Sonic spewing random pop-culture references, Robotnik’s eccentric gurning and smarminess, and Knuckle’s “fish out of water”, I won’t claim that every joke lands nor will certain references age well in a few years but I had plenty of chuckles.

It’s best to manage ones expectations when seeing a movie like this (I detest the sentiment of “lowering your expectations”) because Sonic was always for younger gamers back in the day and this too is primarily for younger audiences. So the themes of family and responsibility it’s trying to convey are a touch heavy-handed and spelled out.. I understand that the likes of Pixar have been successful in the “kids movie but also for adults” broad audience appeal but sometimes the balance isn’t going to be in favour of the grown-ups that keep demanding properties they grew up with grow up with them.

Having said that, at a smidge over 2 hours this is a surprisingly long movie for what it offers. I didn’t have a problem with the pacing apart from maybe during the human-only scenes but then again that was barely an issue anyway (it’ll make more sense when you see it for yourself). There is one “bonding” scene between Sonic and Tails that plays out well enough and is cute as hell but perhaps that could have been trimmed also?

If there is anything else to nitpick it would be the attempt to compensate for the previous movie by cramming lore into this one. I don’t think it overdoes it here, I was able to follow it fine but then again it feels rushed. Again, it’s one of those things that makes you wish they just went with a fully faithful CG movie and yet I still had a fun time with how this did turn out.

After the very cool animated credit sequence, there is ONE extra scene to sit through.

The older I get the more I let go of ideas of lore or canon and just want a good, fun, enjoyable, and compelling story. And, as much as I enjoyed the previous one, I’ll be the first to admit my surprise that I got all that with Sonic the Hedgehog 2. It’s funny, energetic, heartfelt, and it also feels like a present to fans of the old 90’s games too, which I appreciated.

Am I settling for less? Potentially. But I just can’t muster the energy to be that pedantic about something I had such a great time with. Definitely a blu-ray purchase (and I’ll see if I can hunt down those posters).

If you enjoyed this review then please consider contributing to my tip jar: ko-fi-com/oldtrenchy