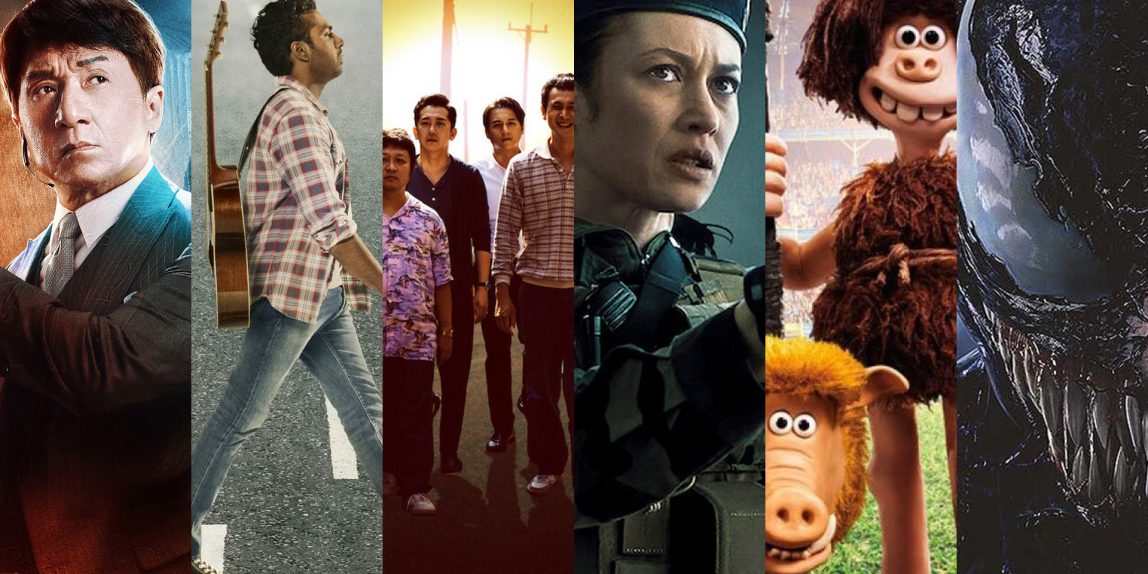 It’s that time again as I sit back at home to catch up on a few films I’ve missed out on previously (although, admittedly these happened over many weeks, which may be a testament to how much time I have to watch random films at the moment)…

Vanguard (2020)
I’m adamant that Jackie Chan’s last truly *great* film was in the late 1990’s with Who Am I?. Since then there’s been a scattering of enjoyable and fun movies but for the most part it’s also been a case of diminishing returns.

Somehow I’m having trouble forming a definitive opinion on this one. It’s not great and yet I don’t hate it, in fact I rather enjoyed it more than I should have despite it not being good. The plot is corny and trite and some of the acting from the supporting cast is atrocious but we’ve sort of come to expect that.

In the grand tradition of aping Hollywood trends, Vanguard tries to be Mission: Impossible with a sprinkling of Avengers, which actually kind of works. The third act even does its best Fast & The Furious cosplay before fizzling out at the end. The globe-trotting story as well as the team that Chan has put together feels reminiscent of his films when he was at his peak (like the aforementioned Who Am I? and Police Story 2). And the main cast are surprisingly good too, considering Jackie isn’t doing everything as he normally would and considering his age I don’t begrudge that his co-stars are taking on more of the action. Side note: it’s surprising that the director and CEO of a company would go out into the field like that at all.

However… the second act is a problematic mess as it fails to remember it’s 2020 as well as attempting to appease mainland China with its “Chinese exceptionalism” (Captain China indeed). The CG animals are well rendered but poorly composited, and the film doesn’t quite know what tone to convey from scene to scene.

And yet I had fun with this one. This isn’t exactly a recommendation this is a “watch at your own risk” kinda dealio.

Yesterday (2019)
With a great and quirky premise, a couple of charming lead actors, and perhaps the most legendary music to ever be a soundtrack for a movie I’m really confused as to why this film didn’t work for me.

Quite honestly, I’m having a difficult time articulating why I didn’t enjoy this as much as I had hoped. Yesterday didn’t necessarily need to delve too deep into the full ramifications of the world forgetting The Beatles and their music. And it didn’t. Instead it focused on the romantic comedy, which is the heart of the movie and where I was properly invested. However, despite plenty of elements and moments I enjoyed, none of it was held together in a convincing manner. Stuff simply happened in the correct order.

I did also enjoy that the film didn’t go down too many of the obvious tropes but ultimately, by the end, I felt rather unsatisfied. Also Ed Sheeran should never be asked to act ever again.

Classmates Minus (2020)
I’m not normally into these sorts of films but I stumbled upon this black comedy from Taiwan on Netflix and it intrigued me.

The trailer to Classmates Minus does mate it a tad more energetic than the film turned out to be but the dark humour and average and somewhat depressing nature of the characters is completely maintained and that drew me in. This is a story about four high school mates, now in their 40’s and all experiencing their own struggles with middle age… and it spoke to me.

Not to spoil anything but the film also doesn’t attempt to resolve any of the stories being told. And that really just enhances the bleakness of the story. There is no profound statement or thesis being expressed other than an attempt to reflect on “normal” people.

Sentinelle (2021)
The only thing worse than a bad film is a dull film because at least a bad film has something interesting to analyse as to why it’s bad.

It must be clarified that “Operation: Sentinel” is a real military operation that was rolled out in the wake of the terror attacks in France in 2015. 10,000 military and over 4,000 police personnel patrol vital or sensitive areas due to the country still being in an ongoing state of emergency to this day. The movie does explain this but sadly that may be the only interesting part of the whole thing… and it barely does anything with it other than give a faint excuse as to why our protagonist is highly-skilled and so well armed.

Excruciatingly slow, boring action scenes, uninteresting characters, poor set up and lacklustre build up, it introduces the main villain 2/3 of the way into the movie and the movie is only 80 minutes long! Even the sex scene was dull. Like how does a FRENCH film make a lesbian sex scene boring?

I would say Sentinelle squanders every little bit of potential it had but that would imply it made any effort to build any excitement and suspense in the story. There doesn’t seem to be a reason for this film existing. There are video loops of fireplaces with more of a point than this movie.

Early Man 92018)
I’ve been a major fan of Aardman Studios’ work ever since Wallace & Gromit and once upon a time I even wanted to get into animation (any and every kind really) so a feature film with their brand of humour and aesthetic is always very welcome.

This one is a bit of fun and mostly okay but definitely aimed at younger audiences especially those that are into football (with the round ball). A typical sports-focused story where the underdog has to win in order to determine their fate.

The story itself is fairly straightforward and predictable and so most of the movie gets its mileage from the gags, some land better than others but they all revolve around the “make ancient stuff modern” pastiche that we’ve seen a lot in other kids media. Although, it does look great, there’s something not quite as cinematic about it compared to say the Wallace & Gromit stuff or even Chicken Run.

It’s charming and a little heart-warming and aside from the rather impressive cast of well-known British performers (including a very hammy Tom Hiddleston) there’s little else for older audiences.

Venom (2018)
Sweet merciful fuck this was dreadful and I don’t know why I put myself through that.

I actually stopped this movie halfway it was so terrible. I only continued watching to “give it a fair shot” and regret ever being so considerate. Its box-office success is dumbfounding if it weren’t for the fact that so many people were confused in the lead up about whether this was actually part of the MCU or not (because no one gave a definitive answer in the hopes that would trick people into seeing it).

This misguided attempt at a “movie” is ugly and cheap-looking, tone-deaf, cliche-ridden, and hideously dull. It lacked any tension or excitement and its attempts to create characters for the audience to care about were awkward at best. To say there was a nugget of a good idea is giving it too much credit, to claim that I could see what they were trying to do lets them off the hook. Every single choice this film made was the bad one. As you’ve read in my other mini-reviews, I can admit to enjoying bad movies but for Sony to try and wrangle this into the MCU feels like vandalism.

To anyone I know who’s said they enjoyed this unironically… I have lost all respect for you.